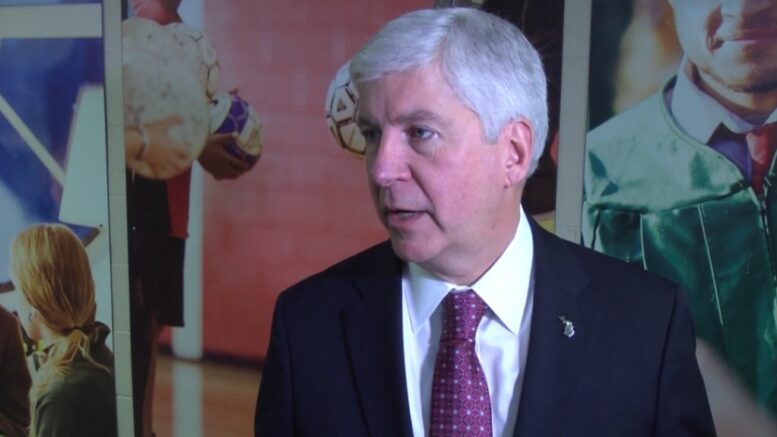 MARQUETTE — The U.P. Energy Summit was held today on the campus of Northern Michigan University. Presentations and speeches were made from energy developments across the region, along with a visit from Michigan Governor, Rick Snyder.

The U.P. Energy Summit gives local, state, and regional energy departments the chance to express their perspectives pertaining to energy in the U.P. Presentations were executed from developments including; the Michigan Agency for Energy, the Michigan Public Service Commission, SEMCO, and Enbridge, just to name a few.

The sole purpose of this day was to create dialogue on energy issues in the U.P. between industries and state departments.

“We just want to talk about the important of line 5 for this region in particular; this event gives us the chance to do that. When line 5 was built, it was built to protect the straights and be a safer alternative to than have some of the boats deliver the energy here through this area. It was meant to be a safer alternative and that’s what its been now for more than 60 years,” said Enbridge Spokesperson, Ryan Duffy.

In regards to any updates on the Enbridge pipeline 5 in the near future, they plan to keep delivering safe and affordable propane to U.P. residents, especially during the winter months. Energy resources have been a topic of discussion in recent months, such as the potential natural gas plants being placed in Baraga and Marquette counties.

The approval process for these plants is still in the works according to a chairman of the Michigan Public Service Commission.

“Well the local utility applied with the commission with what is called the certificate of need that was done at the end of January. The commission, it’s 270 day process, and we’ll evaluate need for the plant, we’ll look at different alternatives, and then make a decision whether they should move forward with the construction of the facilities,” said Michigan Public Service Commission Chairman, Sally Talberg.

Governor Rick Snyder made a stop at the conference to discuss the issues that have plagued the U.P. regarding energy resources, such as reliability and affordability. According to Snyder, the use of integrative asset management could be extremely useful in the U.P. by sharing energy sources with the state’s neighboring areas.

“I’m proud to say that we’ve had a study going that will hopefully get done sometime this year about doing a connection to the Lower Peninsula, but we’ve actually expanded it to say; could we also connect to Ontario? They have some great power sources there and they’re our neighbor. So let’s be forward and say, there is more than one option here, let’s look at them all,” said Michigan Governor, Rick Snyder.

Snyder also mentioned that the U.P. is a leader in clean resources with the use of biomass. Michigan is a strong natural gas producer and Snyder is hopeful that long term, the Upper Peninsula will find new energy sources due to the opportunity for new generation capacity in the U.P.

Democratic response to Snyder’s State of the State address