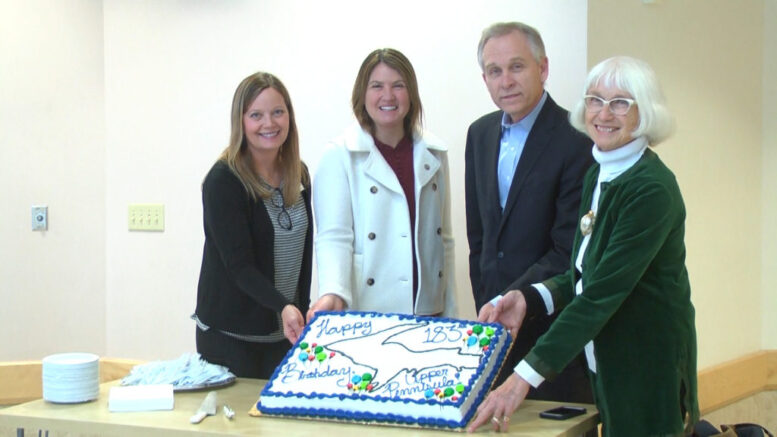 MARQUETTE — On Saturday, a celebration was held at the Marquette Regional History Center in honor of the Upper Peninsula’s 183rd birthday.

On December 14, 1836, Michigan accepted the Upper Peninsula as part of its territory in a meeting called the Frostbitten Convention. Just over a month later, Michigan was granted statehood.

However, this agreement was not reached easily.

“The odd thing about the Frostbitten Convention is that it was the second one,” said Jane Ryan, the woman who came up with the idea to hold a celebration for the Upper Peninsula’s birthday. “Congress had said that the people of the Michigan Territory have to approve of this doing, and the first time it was voted down. The U.P. had no connection, so why would we want to join up with this hunk of land that doesn’t even seem like a part of us. But the Territorial Governor, who was Stevens T. Mason, wanted to be a state governor, and there was money that went with this offer for the state. So he called another convention on December 14, and he somehow stacked it so that it was unanimously approved.”

Even though the Territory of Michigan wasn’t completely thrilled about the results of that convention initially, people realized soon after that the Upper Peninsula was full of incredible resources.

“Within a few years the mineral deposits, particularly the iron ore, were discovered, and suddenly even people in lower Michigan thought, ‘Aha, this is worth it!'” said Ryan. The Civil War followed a couple decades later, and that iron ore was a really, really valuable resource for equipment for the armies, plus the railroads. So the value has increased greatly, and then of course there’s the beauty of this area. So I don’t think there are any regrets.”

The local community gathered at the Marquette Regional History Center to celebrate the history of the Upper Peninsula and all that it’s meant for the state of Michigan. Speakers at the event included Menominee native and a former Chief of Staff to a Michigan congressman Mark Ruge, as well as State Representative Sara Cambensy.

Representative Cambensy says that December 14th is an opportunity to celebrate both the history of the Upper Peninsula and our connection to the lower part of the state.

“All Yoopers are proud of our heritage, and we’re certainly proud of our ability to be independent and fight,” said Representative Cambensy. “But we certainly want to be recognized as part of Michigan, and today was a great day to celebrate how that came to be and to do it with a bunch of people that certainly love the history of not only the U.P. but of Michigan as well.”

The ceremony ended with a party in the Upper Peninsula’s honor, complete with a birthday cake.