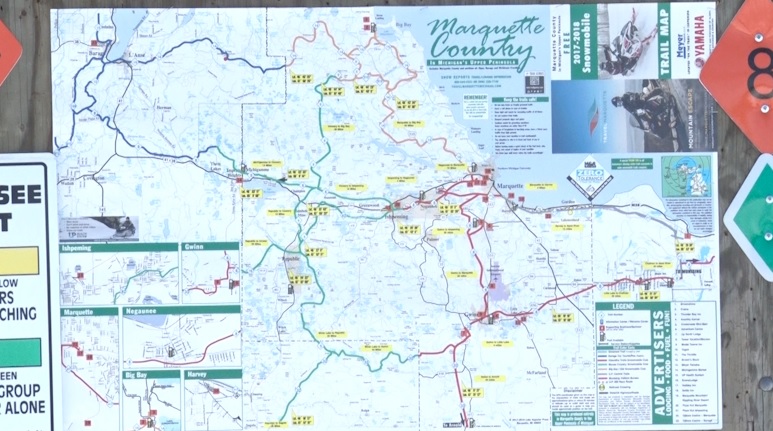 MARQUETTE COUNTY — If you travel outside of any city around the UP, you’re bound to either see a snowmobile, or the tracks where they ride, and often they’re helping the local economy by stopping at businesses on the outskirts of towns.

The Upper Peninsula accounts for over half of Michigan’s trails that are maintained by the DNR, with just about 3,100 miles above the bridge, and another 2,900 miles below it. And high amounts of snow that we’ve gotten so far this winter make it perfect for the snowmobiling community around the area. But when looking at how that will impact the economy, you have to look beyond just the state.

“There’s about 200,000 registered snowmobiles in the state of Michigan, and about 141,000 trail permits are bought in the state,” said John Pepin, the Deputy Public Information Officer for the Michigan DNR. “But for the economic impact, it’s kind of difficult to get your hands around because we have a lot of people that come here to sled from other states. The Upper Peninsula is often rated very high in snowmobile magazines and such, for the trails that we have here.”

Often times the people coming from other states will purchase trail permits and are reliant on the local lodging and restaurants throughout their visit to the UP. One such location that benefits from the snowmobiling in the area is the Crossroads Restaurant. Located at the intersection of 480 and 553, the trail system in the area helps keep the restaurant going in the winter months when businesses tend to slow down.

“Snowmobile traffic through here is pretty popular,” said Crossroads Restaurant manager Nick Bazinette. “We’re in Central U.P., so we get trail 8 traffic, a lot of the guys that come through here do the Munising loop. They go down 417 and come and stop here. With the Arctic Cat dealer, and the gas station, we have the beer and food here. It’s a popular stop for a lot of snowmobilers. On the weekends we easily get a couple hundred sleds between Friday, Saturday, and Sunday. During the week, we get the guys that want to avoid all of that traffic, and we still get probably 20-30 a day.”

When the Crossroads Restaurant first opened up 14 years ago, snowmobilers were a big factor in helping the business stay afloat throughout the winter. Today, the business is much more stable, but without the snowmobile traffic there would be a noticeable difference in the money that comes in every week.

And the UP trail system being so highly regarded draws people from all over the country, which in turn brings in money to the area.

“In years when we have a lot of snow, a lot of times there’s other areas in the Midwest that don’t have the snow,” said Pepin. “So we become an area that attracts a lot of riders.”

“You get to meet all of these snowmobile riders that are coming through,” said Bazinette. “There’s quite a variance on where they’re all coming from. Ohio, Pennsylvania, New York, Wisconsin, Chicago, Minnesota, you catch people from everywhere. I’ve had a few people that come up from Florida and they rent sleds and get cabins up here.”

While the snow is starting to get on the nerves of some people, the local economy is definitely better because of it.

Fox Motors gives away a snowmobile.