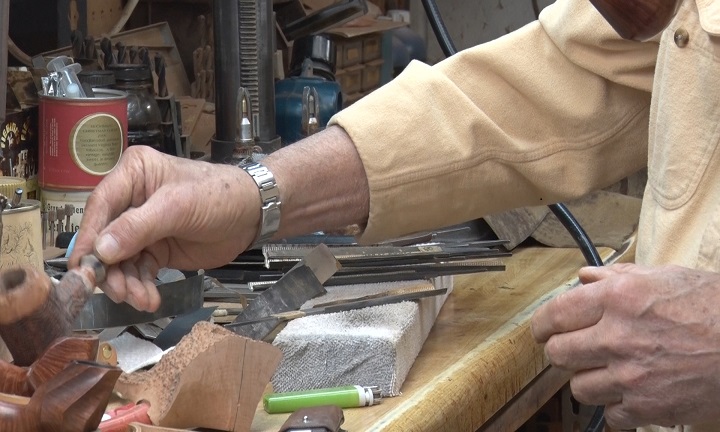 MARQUETTE COUNTY — Well the U.P. is known for a lot of cool and unique things but did you know we have a famous tobacco-smoking pipe maker.

The U.P. is known for many things like the superior dome, Munisings pictured rocks and the Great lakes. But many don’t know that the U.P. is home to a famous tobacco pipe maker named Lee Erck.

Lee has been making Pipes for over 30 years now and has no plan on stopping.

“I can come down here,” said world-renowned pipe maker, Lee Erck. “I don’t call it going to work anymore and I haven’t for a long time. I am going to my shop, because I can come down here and the whole rest of the world disappears. It is me and the piece of wood that I am working on. I get so involved with it that time just flies by.”

It can take usually a few days to complete a single pipe with many hours being put into each part of the pipe itself. But before the pipe is created Lee takes his time and figures out what type of pipe will work best for the piece of wood.

“I look at the piece of wood and decide what pipe would look good in that piece of wood,” explained Erck. “What shape can I get out of this piece? As you can see there are a lot of pieces of wood up there on the shelf. I still haven’t figured out what they are going to be.”

But when making a pipe he always wants the piece to catch a customer’s eye and among other things.

Although Lee is a busy guy and has many pipes he is currently working on. He even has a saying he likes to use when describing his workload.

“I’ve got pipes… I have stuff on the bench over here that I’ve got to do,” explained Erck. “I wish I could catch up to being behind.”

But at the end of the day he has a goal of making his products the best they can be, and tries to complete at most 50 pipes a year which can range from $750 and up, some even reaching into the thousands. Although an important part of Lee’s work comes from his marketing and how he connects with his friends and customers. That includes going to regional shows and talking to clients.

But Lee uses webcams as well to let people watch him while he works in his shop. He has even sold some pipes while he was in the process of making them.

“I have sold pipes off of my bench before they are done,” explained Erck. “People ask me to hold them up to the webcam. I have had webcams before these 4 cameras set up and before Facebook live. I had three cameras in here but they were wired USBs. The customers will come in an sit and watch me make their pipe. It makes them feel like they are here in the shop. Again the same feeling that they got from 15 minutes talking to you when they are at your table… I watched my pipe being made.”

Although Lee doesn’t have children he thinks of all of his pipes that he has sold across the world and how they will be around even after he is gone.

“Well I don’t have any kids to leave,” said Erck. “So it kind of replaces that feeling, because a little piece of myself leaves with every pipe that goes out of here. There are little pieces of me all over the world. There will come a day when somebody will be cleaning up grandpas house somewhere in the world and they will find this pipe.”

For more information about Von Ercks Classics Pipes you can click here.

Vaping and e-cigarettes may be facing a ban in Michigan

NMU gearing up for tobacco-free deadline