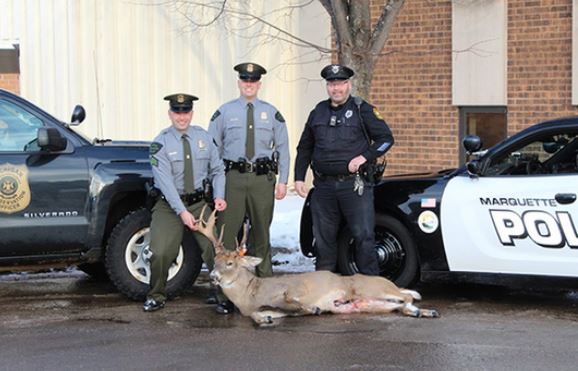 He was arrested today on warrants issued by the Marquette County Prosecutor’s Office for violation of hunting regulations.

All charges authorized are misdemeanors and the total bond was set at 10% of $10,000.

Roose was unable to post bond and was lodged at the Marquette County Jail.

The man’s name has not been released. County prosecutors are reviewing charges in the case, which could be either misdemeanors or civil infractions. At about 10:30 p.m. Sunday, conservation officers received a tip from the public that a man claimed to have killed a trophy 12-point buck that was well-known to residents of a Marquette subdivision.

“He claimed to have killed the buck in Deerton, which is located about 20 miles from the subdivision,” said acting Lt. Ryan Aho. “Over the past few years, multiple residents of the community have shared pictures of the buck on social media, which they had seen regularly walking through yards.”

Acting on the tip, conservation officers contacted the man Monday morning. Following an interview, the man confessed to shooting the deer within the city limits.

“He also admitted to trespassing on private land located about a quarter mile from his residence,” Aho said. “The deer was killed over a bait pile from a blind constructed from trees cut illegally on the private property.”