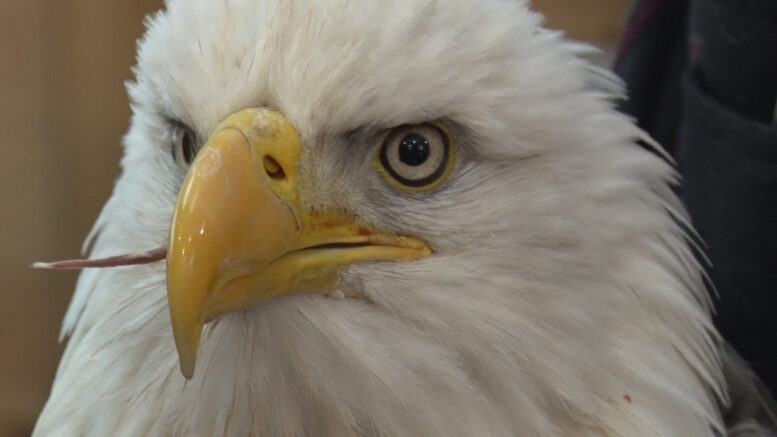 MARQUETTE — A bald eagle has died due to an unknown illness in the Copper Country.

At this time, what is believed to have killed the US national bird was lead poisoning. A local in the Copper Country had sighted the bird of prey acting strange and weak.

So he contacted the Chocolay Raptor Center for advice on how he could help.

“A couple of days ago a man called me up from the Copper Country and he was out in the woods and he spotted a bald eagle that was perched but it looked like it was very weak,” said Co-Founder and President of the Chocolay Raptor Center, Jerry Maynard. “He approached it and it couldn’t fly, so he went back the next day and called me. So I told him how he could rescue the eagle safely and he said he would bring it down. But the eagle had died on its way down here.”

Now with the deer hunting season in full swing it is common among scavengers to eat meat and innards that were left by hunters. Sometimes this meat can be contaminated with fragments of lead embedded within the scraps that are left on the ground.

This can cause lead poisoning in birds such as bald eagles and other raptors that eat this contaminated meat which then can end up dying.

Now there are ways to prevent these deaths happening during hunting season.

“it is in increasing awareness of the problem of lead,” added Maynard. “It is also increasing awareness with hunters about switching to other ammo. There are also alternatives notably copper alloyed bullets that perform very similarly to lead but don’t have the toxicity issues.”

For more information on the Chocolay Raptor Center you can click here.