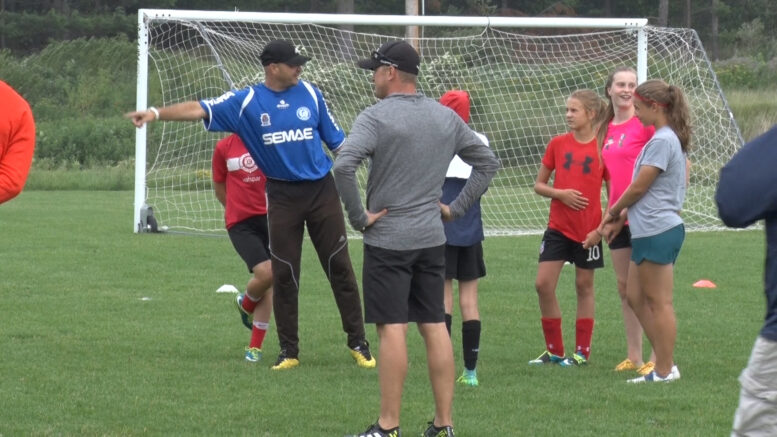 MARQUETTE — With the coaching clinic continuing at Kaufman Sports Complex, things are finally starting to come into place for the city’s newest soccer club. With the clinic wrapping up this week and coaches getting used to the team’s style of play, it’s shaping up to be a successful first season, win or lose, for Marquette United.

“We’re going to have a really strong team, and it’s going to be good for all of us,” said player Hannah Mason.

“I’m excited about it because we’re going to have more competition,” added teammate Bella Lorens.

From a player’s standpoint, being part of a youth soccer club is about more than winning. With the merger of two clubs, there’s bound to be a reunion of some familiar faces.

“All of our friends are together,” said Mason. “I had some friends on the other team, and I think we’ll have a strong team, and I’m excited for the upcoming season.”

One of the benefits of adding more players is adding to the level of competition to make the team. The players will be able to  compete  with players their age, which increases their chances to develop more efficiently.

“The whole situation will increase the opportunity for everybody, but at the same time, it’s going to add more responsibility for the players and their families, because we don’t just care about the skill, we want to promote sportsmanship, hard work and effort,” said Coaching Director Sasa Kostic.

The team will soon be holding their tryouts. It’s been a fast–paced process for Marquette United, but with a new organization bursting on to the youth soccer scene, there’s no better way to make an entrance.

Scores and highlights from Thursday, 9/18/14