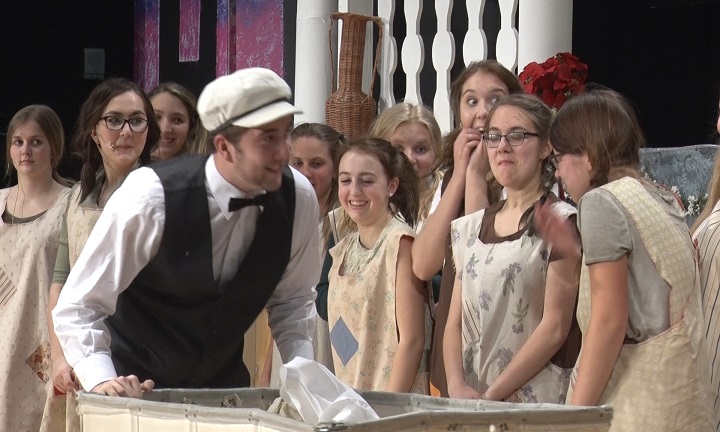 NEGAUNEE — Some students are donating some money from their performance this coming weekend to help out their community.

It’s a hard knock life and some students in Negaunee are trying to make it better for the youth in their community. Negaunee High School is preparing for a classic act of Annie the Musical and the school has been seeing a lot of students interested in the show.

“There is huge participation in this show and it has been awesome,” said, playing as Miss Hannigan, Malorie Munson. “I’ve got to see so many new faces and meet so many new people and talent that I didn’t know we had around here. It’s just been a really awesome experience.”

Over 100 students will be performing in the play which makes just about one fourth of the school in the play. These students have also been preparing for this for some time now.

“It has been since about January that we have been practicing,” said, playing as Rooster, Carter Richardson. “It’s 4 or 5 practices a day that go for 4 to 5 hours a day and running extra time. Some people get sick and it is kind of hard for them to make it. But we have worked around that and we have been able to a really good job at overcoming that obstacle and just putting in a lot of work.”

Due to working hard on and behind the stage, these students also are planning on donating some money they earn through the performance which will be helping the youth in the community.

“The fundraising we are doing is making a donation to the Miner Pacts Program,” said, Creative Director, Emmy Wiig. “This program provides healthy food for kids that go to Negaunee schools that might not get enough healthy food to eat. We are tying that in with our show because there are orphans in the show that don’t get enough food to eat. So we want to do something for the community the show so that’s why we picked that.”

With all the hard work that has gone into this show, the students have been passionate about the whole experience. They love to be a part of these events and really like to take it to the next step with their talent.

“There is people who you would totally not think they were into theatre, but when they are on stage they are just so amazing,” said, playing as Annie, Rachael Popko. “They just have so many emotions that you wouldn’t think they have. You know they get on stage and they are just this bubbly person or they can have a different role and be mean and cruel and it is just insane on how people can change their emotions so much and do good jobs in their roles.”

The performance starts on Thursday April 12th and will go through Saturday. Each Show will start at 7pm.

Lundin Mining plans to increase production at Eagle Mine

Snowplows and salt trucks shed a new light this season