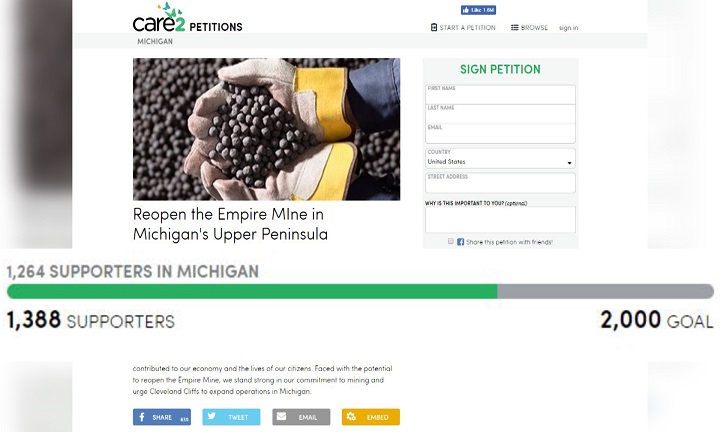 MARQUETTE — During his February 2nd press conference, Cleveland-Cliffs’s CEO Lourenco Goncalves indicated that the company was looking to add an operation in Michigan, possibly re-opening the Empire Mine, or in Minnesota. He said price and community support in each area would contribute to the final decision.

“If Michigan demonstrates that they have a unified resolve behind Cliffs growing, mining here, we’ll be here. I don’t feel like I have that type of support in Minnesota. That’s a lot more important to me than just dollars,” he said.

The Lake Superior Community Partnership is asking for the community’s support in helping convince Cleveland-Cliffs that re-opening the Empire Mine is the right decision.

“The biggest thing is for people to sign the petition so Cleveland-Cliffs can see the support that the U.P. has for it,” said LSCP Membership and Administrative Coordinator Kennan Marana.

The petition already has almost 1,400 signatures. You can sign the petition by clicking HERE.

The LSCP is also collecting letters of support and resolutions to send in a package to Cleveland-Cliffs. The partnership has already collected several letters, but is looking for more as soon as possible. You can see both a sample letter of support by clicking HERE.

In addition to honoring 170 years of mining history between the U.P. and Cleveland-Cliffs, re-opening Empire Mine would greatly contribute to the local economy and the lives of residents.

“It would be a huge economic impact on the area, bringing in jobs. As you know, a lot of people had left from the previous idling of the mine, so that would be the biggest thing,” said Marana.

Cleveland-Cliffs is set to announce their decision later this year.

Students celebrate Excellence in Education with tour at NMU

Non-profits on display at networking event

Stay optimistic after you're laid off