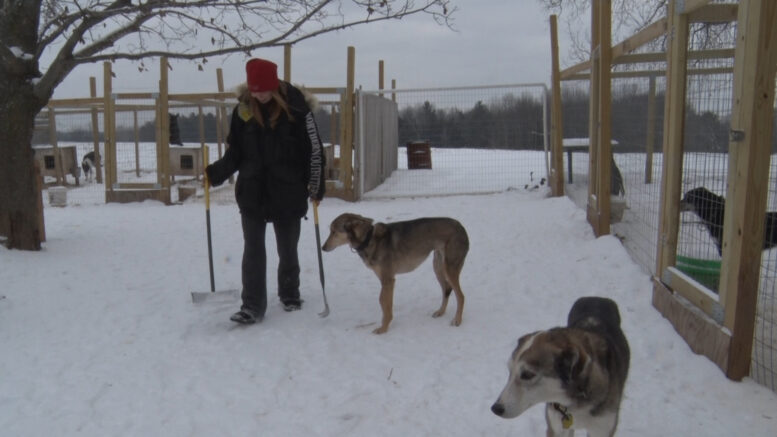 WALLACE — Many dreams can be hard to achieve, even after years of preparation. Down in the Menominee area, noses push forward to achieve an ultimate goal.

Team Evergreen Kennel is just that. A team. 12 dogs who have found their calling, racing in the cold snow, training for years, noses leading the way to finish lines all over the Midwest. Since 2009, many dogs have run over 20,000 miles in the winter, against some of the harshest conditions. Owner Liza Dietzen sums up her experience with sled dog racing.

“Chaos. Organized chaos, that’s what we call it, but we generally do anywhere between three and four races a year.”

Those races include the Tahquamenon Country Sled dog race, and sometimes the UP 200, which starts right here in Marquette. All of the racing has an end goal, of course. Liza and her dogs are working to be a part of one of the biggest sled dog races in the world, the Iditarod.

“We are two thirds qualified for the Iditarod right now, we need one more 300–mile race which we hope to complete in the next couple of years,” said Dietzen.

They were originally planning on going to the Iditarod in 2017, but some adversity caused that dream to be put on hold.

“We had a lack of snow, we had cancelled and rescheduled races that just didn’t line up with what we needed to get done, so we missed our last qualifying race,” said Dietzen.

So, every day, Liza does all of the extra chores to make sure that her team is comfortable and in good shape. That means keeping the kennel clean, feeding them a raw diet, and of course play time. All of the small things end up being worth it in the end.

“The racing is a lot of fun; it’s also a lot of work,” said Deitzen. And that’s why I always say ‘if you’re not having fun, why are you doing it?’ because what’s the point if you’re not going to have fun?”

Veterans get experience to ride with sled dogs