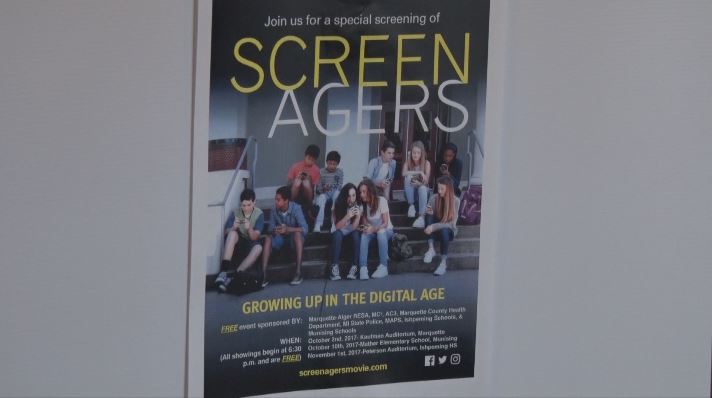 MARQUETTE–A popular documentary focusing on the impact of the digital age on children and parents was shown Monday night at Kaufman Auditorium in Marquette.

“Screenagers” brings to life the influence that devices have on our families and how to help youth maneuver in this digital age. Created by filmmaker Delaney Ruston, “Screenagers” revives questions about the impact of technology on our lives.
The film is brought to the public through partnership with, MARESA, the Michigan State Police, Marquette, Ishpeming, and Munising Public Schools, among others. The showing consisted of a community viewing of the film, which was followed by a discussion and Q&A facilitated by Detective Jay Peterson of the Michigan State Police.

“There were some interesting aspects of the film that made me as a parent, as a coach, and as a community member to take notice that kids on average spend about six and a half hours on their phone or some sort of screen device,” said Michigan State Police Detective, Jay Peterson. “While it’s great for learning, it can have some negative effects as well.”

The documentary will also play at Mather Elementary in Munising on October 10th, at 6:30 p.m., and at Ishpeming’s Peterson Auditorium on November 1st at 6:30 p.m. These are free and open to both kids and adults.

MSP collects over 500 lbs. of drugs during Drug Take Back Day