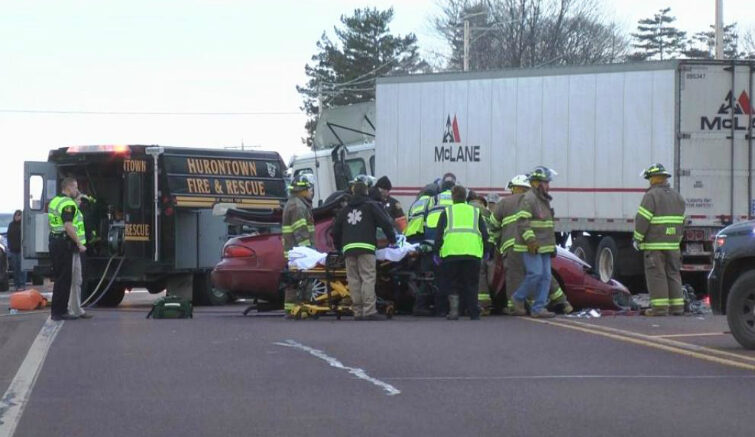 HOUGHTON — A Laurium woman is hospitalized after a head-on collision this morning in Portage Township.

The accident happened on M-26 about 1/8 mile south of Green Acres Road around 8:15am when a Dodge sedan collided with a semi-truck. A 40-year-old Laurium woman was driving northbound in the sedan when she crossed over the center line and struck the southbound semi.

The Houghton County Sheriff’s Office says witnesses saw the driver of the Dodge veer across the center line into the path of the semi and strike the vehicle head on. The driver of the car had a child in the back seat of the vehicle but he was uninjured during the crash because he was properly restrained in a car seat.

The woman had to be extricated from the vehicle with the jaws of life by the Hurontown Fire and Rescue Department. She was transported by Mercy Ambulance to U.P. Health System—Portage.

Her condition has not been reported. The driver of the semi was uninjured in the crash.

Both vehicles had to be towed from the scene. M-26 was closed for about an hour.

The accident remains under investigation.

Tips for safe driving around snowplows