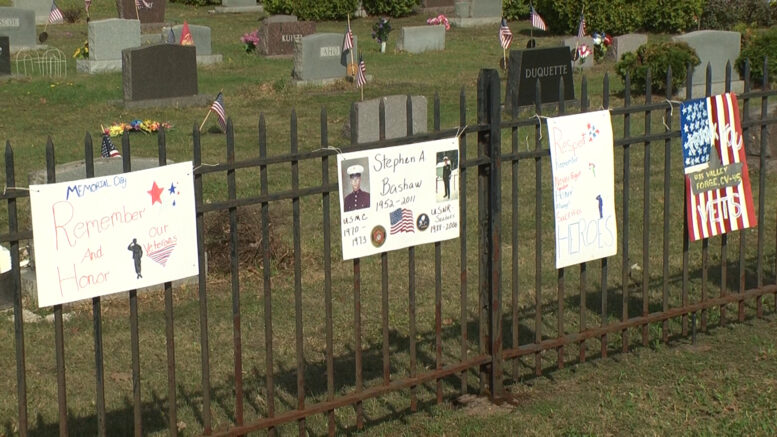 ISHPEMING — On the morning of Monday, May 25, members of the Ishpeming VFW and the local American Legion met with volunteers to hang posters outside the Ishpeming Cemetery in honor of Memorial Day.

In place of the usual Memorial Day Service that was canceled this year due to COVID-19, community members made posters as a tribute to those who have given their lives while serving in the Armed Forces.

Tom Sharland is the Army veteran who handed out the blank poster boards to participants earlier this month. He says he’s touched by the community’s response to this project, and he hopes people who see it will recognize the importance of remembering those who made the ultimate sacrifice.

“For a vet that’s lost friends in the war, it touches a little deeper,” Sharland said. “A lot of people nowadays don’t remember the wars or 9/11. I just hope people that come by recognize the real meaning of why they’re here.”

People like Edward Korpi made posters in remembrance of family members. His father entered the Army in May of 1941, which was the same year as the bombing of Pearl Harbor.

“My dad was George Korpi and he was a truck driver,” said Edward. “I think the nice thing about him joining the military earlier than December 7th is that was his military occupational specialty, a truck driver. He did not have to be an infantryman. He is buried right here.”

As another display of honor and respect, the group placed more than 1,750 flags on the graves of veterans at the cemetery.

They hope all who drive by or visit the cemetery this Memorial Day will take notice of the flags and posters around the gate, and take time to reflect on the sacrifices of our country’s servicemen and women. The posters are hung on the outside of the cemetery gate, across from St. John.

Veterans Affairs Department in the works for Marquette County

Just under $4,000 donated to local veterans