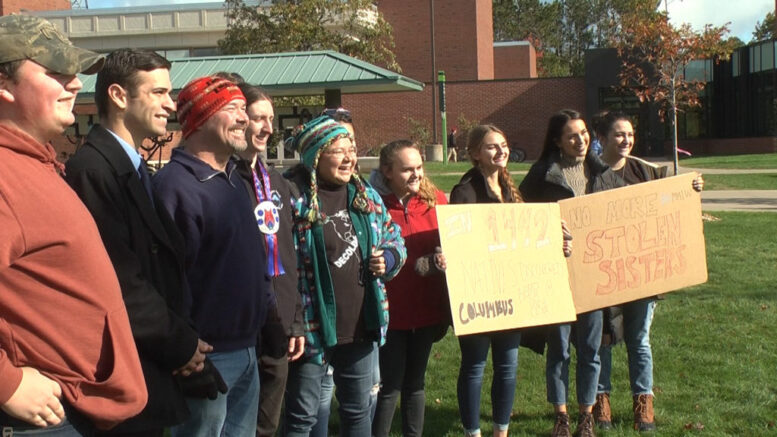 Students gathered from 10:00 this morning until noon to show their support of Indigenous Peoples Day being officially recognized by Northern Michigan University. The rally was also an opportunity for people to come together in celebration of the rich heritage of indigenous peoples in the Upper Peninsula.

Associated Students of Northern Michigan University President Cody Mayer proposed a referendum in April of this year to the student body in support of recognizing Indigenous Peoples Day. 89% of the student body who voted supported that referendum. Mayer brought the proposal to the board of trustees in September. The board decided to make a committee to discuss officially recognizing the day moving forward.

“I think it’s important for a lot of reasons,” said Mayer. “The entire Upper Peninsula is on Anishinaabe land, so to be able to show the respect and honor to that culture and those traditions and those people I think is a huge thing. Myself, I’m a member of the Sault Tribe of Chippewa Indians, I think it’s really important that we come together and move forward on this topic. If I am in a position where I am the student body president and I come from this kind of community and this culture, I feel like I have an obligation to move this topic forward and keep fighting for it.”

People from the community outside of NMU also came to show their support. This included students from Marquette Senior High School, whose Redmen mascot has been the subject of controversy for years.

“We are indigenous people, and right now in our school we’re trying to fight getting rid of the mascot,” said Anna Wheeler, a student at Marquette Senior High School. “So we thought that we would come out here today and celebrate our culture. I feel like it would be pretty important to have Indigenous Peoples Day recognized in Marquette because of what’s going on. People don’t really know the real culture behind the mascot, so by having Indigenous Peoples Day, they can open up a conversation about what it means to be indigenous.”

“While Indigenous Peoples Day doesn’t necessarily excuse the history that has happened or Columbus and all of his actions, I feel like it’s more symbolic of us celebrating us as people because we have been so overlooked,” said MSHS student Roxy Sprowl. I also feel like being high school students, we’re even more overlooked because of our age, so I felt like it was really important for us to be here.”

Those in attendance at today’s rally hope Northern Michigan University will officially recognize Indigenous Peoples Day for next year. As for this year, they decided to recognize the day within the student body. They hope this sent a clear message to the university.