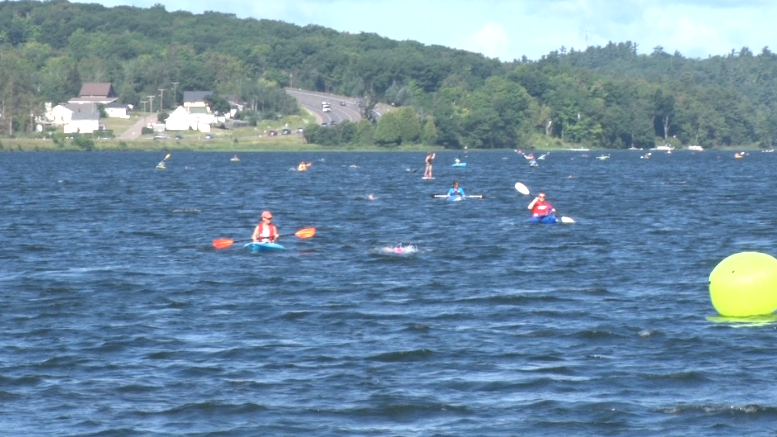 Kayakers and swimmers making their way toward the Negaunee beach.

NEGAUNEE — Saturday morning was a busy day on the beaches of Teal Lake, where over a hundred people gathered to raise money for the Upper Peninsula Diabetes Outreach Network.

The morning kicked off with the new “Short and Sweet Swim,” where swimmers did a shorter swim of almost a quarter–mile. The winner of that swim, 16–year–old Sarah Letourneau, said the waves were a bit of a problem, but they didn’t stop her from reaching her goal.

The full length race usually starts in Negaunee and ends on the Ishpeming side, but due to the wind and waves, the race was ran in the opposite direction for only the second time in the history of the swim. On the beach in the Al Quaal Recreation Area, the swimmers for both the competitive and beginner heats lined up to take on the over 2–mile swim to the other side.

Volunteers brought kayaks and paddleboards to follow along the swimmers to ensure their safety, and luckily there were no major issues. The winner of the competitive swim was Marquette High School swimmer Colin Vanderschaaf, who set a new record for the swim, at just over 42 minutes.

Family and friends cheered on the swimmers as they made their way on shore. Overall the entire day was a success with a lot of people coming together to raise money for a good cause, and everything was done safely.

There were 80 swimmers for the entire day, and over $11,000 was raised for the day with some donations still making their way in. At the end of the day, everyone gathered back at the Al Quaal Lodge for lunch and an awards ceremony.

ABC10 sponsored the event, and two of our anchors even raised money and swam in the event as well.

“As for myself, I had a tremendous time with this swim,” said ABC10 Sports Director Jon Michael Hoefling, who finished with a time of 1 hour and 27 minutes. “I came into it expecting to do well, I gave myself a time of 46 minutes as the goal, I didn’t know that was the record at the time. It was definitely an experience I won’t forget anytime soon, especially since I came in 2nd for my age group. And Dan didn’t.”

“It was extremely difficult, I didn’t realize how long 2 and a quarter [miles] would be swimming,” said ABC10 Senior Reporter Dan Callahan, who finished the race with a time of 1 hour and 34 minutes. “I was happy I could complete it. I was only 7 minutes behind Michael which was surprising on my part, I did not expect that.”