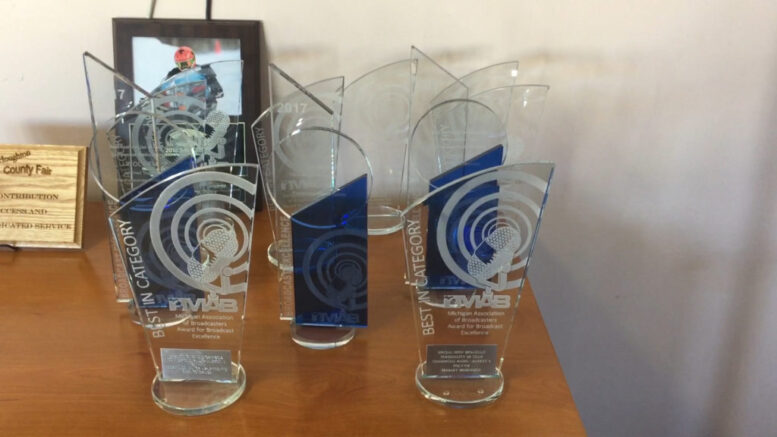 HOUGHTON — Radio and TV stations across the state of Michigan are either celebrating a job well done, or perhaps looking for ways to improve their level of performance in the next year, after last night’s Broadcast Excellence awards, which is an annual event recognizing achievements from Michigan Broadcasters.

The Lansing awards ceremony brings representatives from nearly every public and commercial radio and TV station in the state as each one hopes to win a prestigious title.

One radio station in the Keweenaw Peninsula is celebrating that award, and now proudly refers to itself as the Radio Station of the Year.

Adding to a collection of trophy’s and plaques that represent achievements made from many years of Broadcast Excellence, Houghton Community Broadcasting is celebrating a new milestone.

“For the first time in the Keweenaw we were able to win Station of the Year. That is a prestigious award that we’ve been trying real hard to get. We’ve been close a few times.  Its accumulative of 15 different categories which we were able to take awards in 6 categories of best of and two in the merit category which is 2nd place” said WOLV’s Operations Manager, Kevin “K2” Ericson.

97.7 WOLV-FM, known locally to it’s listeners as “the WOLF” is the Michigan Association of Broadcaster’s 2018 Commercial Radio Station of the Year for it’s class.

It’s all the Upper Peninsula stations, cities such as Alpena, down in the lower part of Michigan, and Ludington, I believe won last year. So it’s really a great honor because of the fact that it’s the one cartegory that does encompass the entire sate of Michigan.

Along with winning Station of the Year, WOLV-FM took home several awards, many for it’s news coverage of this summer’s natural disaster.

“We like to be local and I think that’s what this award is about because the awards that we were given for, were all local categories.  Of course we did a lot of action on the flood tat was pretty much working around the clock and working weeks and weeks afterwards to keep our listeners informed about flood activities” said Ericson.

Winning another Best award was the investigative report on a Mineral discovery made last spring by a Sault Ste. Marie area man who found rocks on the Lake Superior Beach that glow under an ultraviolet light. Founder Eric Rintamaki named the rocks “Yooperlites” which is indicative of both where the rocks can be found, and also references the mineral sodalite, which had never been documented in Michigan prior to the find.

“One is for a program called Grill and Chill, which is a program about hooper grilling and just chilling on the weekend” said K2.

Ericson says the achievement and station’s overall good moral can be attributed to family like atmosphere amongst it’s team.

“The staff itself , it’s really a team. I think we did a fine job and we’re hoping to keep that going next year. They gave us an award that has plenty of space for future awards to be placed on it”