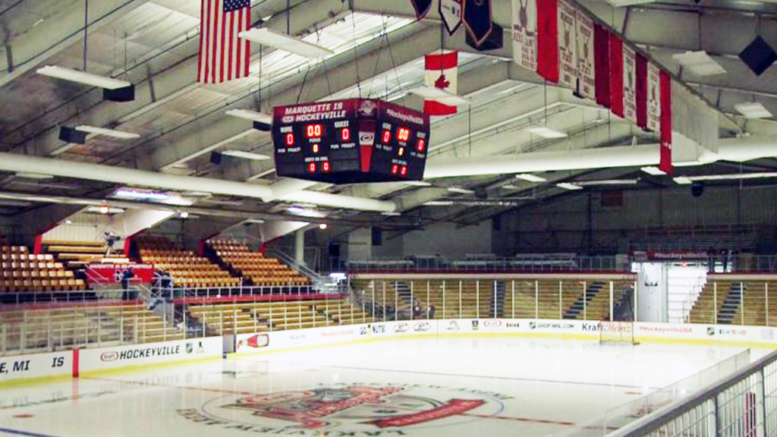 MARQUETTE — Hockey rinks are all around the Upper Peninsula, but a lot of rinks will have to make costly changes or upgrades to stay open as technology advances. The current Lakeview Arena in Marquette first opened it’s doors in 1976, and has been a staple in the Marquette area ever since.

Today, Lakeview is the home rink for several hockey teams and hosts different leagues and tournaments, as well as being used for figure skating, curling, baseball, soccer, and private events. In a small town like Marquette, a large and versatile venue can have a large impact on the community, especially with the money it brings into the area during events.

“There is a huge economic impact every single season,” said Andrew MacIver, the Assistant Director of Community Services in the city of Marquette. “When we have tournaments here, we have anywhere from 12 to even 30 teams. Each of those teams has 10 to 20 players. Usually they bring their parents along, so we’re talking 30 to 40 to 50 people per team that comes to visit Marquette every single time.”

MacIver said that a weekend with a hockey tournament could easily bring in around a quarter of a million dollars to the area. It is for this reason that the arena was awarded the title Hockeyville USA by Kraft back in 2016. Earning the hockeyville title came with $150,000 for the arena and they got to host an NHL preseason game. Now they want to make sure the arena will be able to remain cost effective in the future, which is why they have been making some important upgrades to the facility.

“The city of Marquette did a large energy performance contract throughout the city,” said MacIver. “Lakeview saw about $3.5 million worth of energy upgrades that will payback overtime with this facility. So one of the big things that we focused on was energy efficiency, making sure we have sustainable ice, and also operations with years to come.”

MacIver said that a large portion of the money went to replacing their ice plant, which hadn’t been upgraded since the 80’s. A lot of rinks around the country will soon have to re–evaluate the cooling systems they use, as a popular coolant called R–22 is being phased out of production, and that could raise the costs of operation. Lakeview’s new system runs on an R-22- or freon-based refrigerant, but MacIver says the new system works more efficiently, and they will not have to worry about any increases of costs in the foreseeable future.

“It’s a very efficient system, number 1,” MacIver said. “It’s all new, so leaks aren’t something that we will be dealing with as often. The refrigerant is still going to be on the market for a while to come before that is phased out. So we’re not really foreseeing any issues with that.”

A little over two years after being awarded the $150,000 by winning the Hockeyville competition, approximately $60 thousand of it has been spent at this point. First, they had to get the rink ready for the NHL game, and since then they’ve made some minor upgrades and have done maintenance around the facility.

With the remaining 90 thousand dollars, they plan to use that as matching funds for grants to help make larger improvements throughout the arena to keep it in good shape for a long time. But there are some steps they have to go through first like completing their master plan at the end of the month.

“That’s one thing with the master plan. We need to have one completed so we can provide it to a lot of these agencies, that provide grant funding, that we have a master plan and we have an idea of what we need to do, so they’re able to provide those grant funds to us to get more bang for our buck,” said MacIver.

Chefs chop up the competition

Bikers gear up for Ore to Shore race