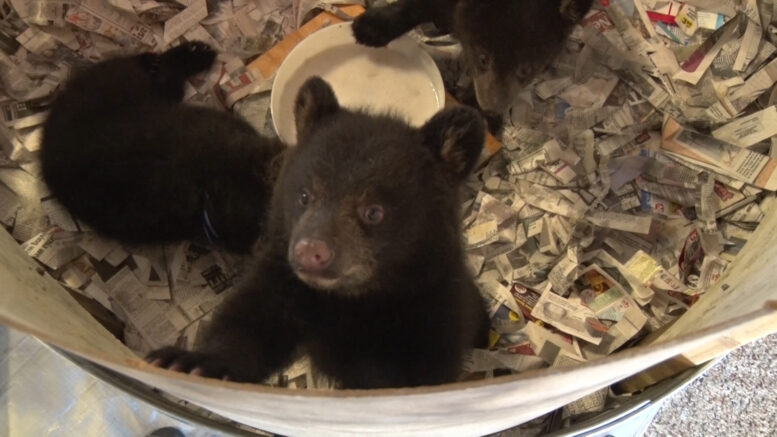 Oswald’s Bear Ranch is now seeking legal action in Lansing to stop the false attacks by PETA of physical and psychological abuse of their bear cubs.   U.S. Dept. of Agriculture Veterinary Inspector cleared the 240 acres rescue facility of any such claims on Sept 5th for the 4th time with in a 1 year timespan.  PETA displayed a mobile billboard of a caged bear throughout the eastern U.P. during the Labor Day Weekend that was not a picture of Oswald’s bear. Oswald’s Bear Ranch is the largest “bear only” rescue refuge in the U.S.  The State of Michigan passed Public Act 8 of 2013 to allow public contact with Oswald’s bear cubs  for the educational purpose of interacting with cubs while having a picture taken. The cubs must be no more than 36 weeks of age and under 90 pounds. PETA’s false prediction that this cub interaction would cause musculoskellotal damage and cognitive development impairment has not occurred in any of the ranch’s bears.

Dean Oswald, a retired firefighter and Marine Corps veteran, is tired of the harassment and “Torturous Interference” that PETA is causing in the daily operation of this unique bear care facility. PETA also is now personally assaulting Dean Oswald in their press releases with negative characterizations. Oswald’s Bear Ranch welcomes all to visit or checkout their website to keep up to date on this developing story.
Press release from PETA sent to ABC 10:
The USDA’s own Office of Inspector General has repeatedly condemned the agency’s failure to enforce the federal Animal Welfare Act (AWA) adequately, and the AWA provides only bare minimum requirements, such as the provision of basic food and water. But Oswald’s Bear Ranch has still managed to rack up AWA citations, including for physically abusing a cub, allowing a cub to injure a guest, and endangering children by allowing them to hand-feed cubs. Make no mistake: This is a facility that acquires cubs from breeders, uses them in cruel and dangerous photo ops, and tries to dupe the public. PETA looks forward to setting the record straight in court and in the court of public opinion.

We have received comment from the bear ranch and the owner calls the accusations “unfounded.” PETA claims the bears at the ranch are exposed to conditions that are inhumane, including being held in cemented floor exhibits.

Dean Oswald, owner of the roadside zoo, said the accusations are false and PETA likes to “harass the people who own small zoos.”

“I’d say it’s a bad outfit, for people to understand that PETA is, they’re almost like a terrorist group, to be honest with you here, here in the United States. They kill 95 percent of their animals,” said Oswald during a phone interview with ABC 10. “My USDA inspector was here just four days ago and he gave us 100 percent credit. There’s no problem here at all.”

The Oswalds have had bears since 1984 and the roadside zoo has been open since 1997. The public has created a Facebook group in support of Oswald’s Bear Ranch and a rally is being planned for November 12th in Newberry.

The Facebook page can be found HERE. More information on the rally will be coming soon.

NEWBERRY — Oswald’s Bear Ranch in Newberry has been accused of committing various federal Animal Welfare Act violations by PETA. PETA claims the bears at the ranch are exposed to conditions that are inhumane, including being held in cemented floor exhibits. A press release from PETA is below as well as a video here:

In the letter, PETA points to three bear cub sisters, named Ashley, Sophie, and Sassy, who are repeatedly used so that paying customers can have their photos taken with them. They were observed pacing and crying out, and one was repeatedly chewing on the caging—all signs of psychological distress. Two of the cubs were also shown to have thinning hair on their hindquarters, something that veterinarians say is likely a result of being confined exclusively to a wet concrete enclosure with no soft bedding.

“Oswald’s Bear Ranch treats these traumatized cubs as props and forces them to live on hard, wet concrete without basic comfort,” says PETA Foundation Director of Captive Animal Law Enforcement Brittany Peet. “PETA is calling on the authorities to inspect this roadside zoo and require proper veterinary care and enrichment for these suffering cubs.”

PETA—whose motto reads, in part, that “animals are not ours to use for entertainment”—notes that Oswald’s Bear Ranch has a history of federal animal-welfare violations and was cited in 2010 for using physical abuse to handle an animal when a USDA inspector witnessed a handler strike a bear cub twice during a photo op.

ABC 10 has reached out to Oswald’s Bear Ranch, but has not received any comment at this time. Stay with ABC 10 for the latest information on this developing story.

Which roads get fixed first?