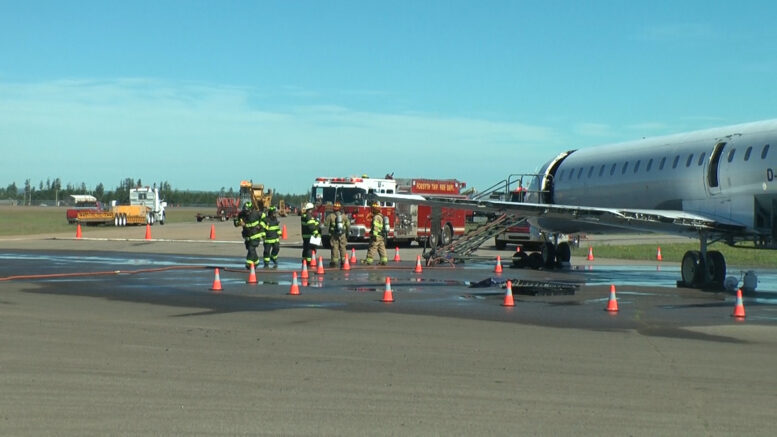 GWINN — Despite only a few operations, Sawyer International Airport was quite busy Saturday morning.

It only happens once every three years. Because of that, when it does happen, it’s all hands on deck. Sawyer International Airport held their tri–annual disaster exercise over the weekend. In the rare instance that a disaster does occur, exercises like this help everyone, from airport staff to first responders, be prepared.

“What this does is it really helps identify our weaknesses, and we try to make sure that we address those with the follow up after the drill,” said Marquette County Administration Public Information Officer Scott Erbisch.

One of the biggest ways to make sure the drill ran smoothly was to prepare, covering some of the main aspects that help to make things run smoothly.

“The biggest part of this is communication, that’s one of the biggest challenges that you have when you have so many jurisdictions and working with that,” said Erbisch. “Communicating with law enforcement, with fire, and how to make sure all of that is coordinated appropriately. So that’s a real big part of the preparation.”

Another part of their prep work was finding a good prop. They were luck to be given an old plane by American Airlines to use for the drill.

“To be able to use a plane similar to what may actually be involved in an incident at Sawyer is an excellent way to train and do hands–on,” Erbisch said.

Airport management looked on as firefighters doused the plane with water, rescued airline passengers and did their work to make sure as many people were as safe as possible. Any room for improvement was addressed in a later rerun of the mock incident.

“It’s getting better and better each time,” said Erbisch. “We’ve never had it where it was really bad, but it’s very positive to be able to work through those challenges that we see here.”

And it’s not like the airport isn’t preparing for disasters in the time being. At Sawyer International, employees are always ready for anything.

“In the years that we don’t have to do a live exercise like this, we do tabletop exercises the other two years, sit down with other agencies, and talk about a scenario,” said Erbisch. “We try to change them up each year and change the location, change the drill. You don’t want to have the same routine; you want to be able to shake it up a little bit, so that you’re still using their skills, but you’re using them in a different way.”

Hopefully, with the proper execution, real victims should walk away from any impending accident unhurt.