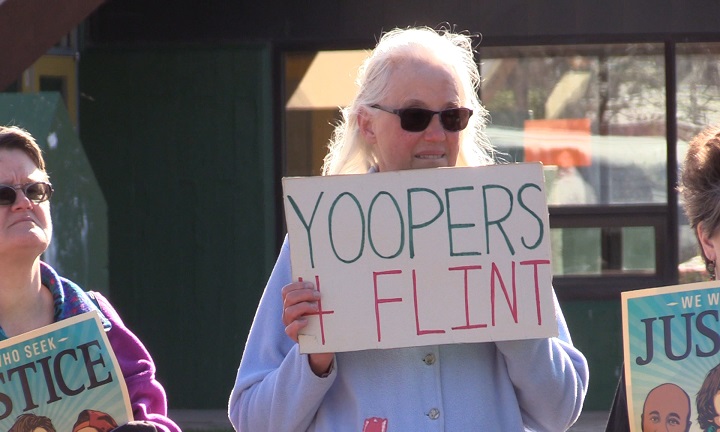 MARQUETTE — Northern Michigan University had their spring commencement ceremony on Saturday, May 5th, at the Superior Dome and it had a little more energy due to the speaker who was invited to the event.

Northern Michigan University held its annual commencement ceremony  for its students that will be graduating and taking their next steps into the world. This year with over 800 students graduating from the university they were able to have Governor Rick Snyder come to the ceremony and be the speaker for the students. Some did not approve of that choice.

“Oil and water don’t mix, neither should lead and water!” was chanted by protesters at NMU’s commencement ceremony.

Protestors outside and in the dome peacefully invoked their first amendment right to protest the Governor due to the Flint water crisis. Many residence, students and members of the Flint community came to show their support for the issues that are still ongoing in the Lower Peninsula. Even during the speech some of the graduates peacefully turned around to show their protest. But not everyone was upset with the visit and others showed their support even during the commencement speech.

“I am here to see Snyder of course, big fan and happy to see the guy and hear him talk,” said, NMU student, Peter Yasoni. “But I’ve also got a few friends graduating this year and a couple of them are here today. I’m hoping to see them and give them a shout out as they crossed the stage.”

Even though people have their different views, others like to stay transparent and get all the facts as well as hear both sides of the issue.

“I think that I would tell them to really look into the facts and also keep an opened mind and just educate your selves,” added Yasoni. “I think that’s the most important thing. You are at a university, that’s what you are here for and that’s what you should be doing.”

At the end of the day the Governor left the graduates with some positive advice for them to look towards the future and to lead with goals for themselves and the world.

“As many of you won’t have just one career during your lifetime,” Spoke, Governor of Michigan, Rick Snyder. “But think about things you aspire to do, and plan ahead it will make a difference. In terms of the second point I would share with you is work hard to be the best at something.”

Understanding conflicts in the Middle East