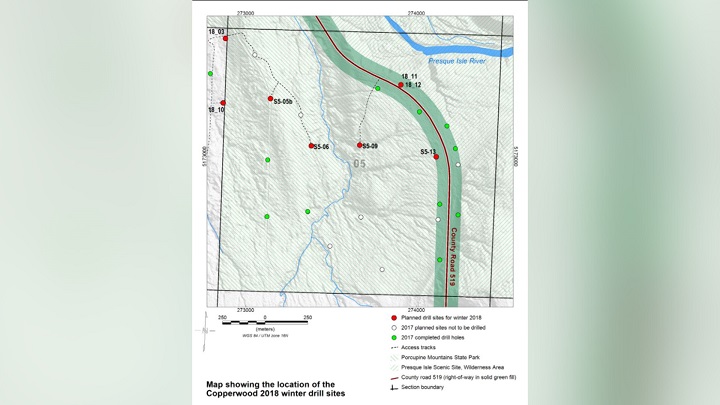 A map shows the location of test holes planned for exploration this winter.

GOGEBIC COUNTY — The Michigan Department of Natural Resources has issued a use permit to Copperwood Resources Inc. to resume its winter exploration of a one mile section of the westernmost portion of Porcupine Mountains Wilderness State Park, according to a DNR press release.

Work is being done in this part of Gogebic County to see if the eastern extension of a mineral deposit first explored in the 1950s might feasibly be mined, which would enlarge the mining company’s Copperwood Project beyond its currently-permitted boundaries.

Drilling and testing will determine hydrologic and geologic composition of the bedrock beneath the surface. Work on these sites is scheduled to be completed over the next month and a half.

“This use permit will allow Copperwood Resources to resume work begun last winter at the park,” said Doug Rich, western U.P. district supervisor for the DNR’s Parks and Recreation Division. “However, this winter’s exploration will be scaled back from the mining company’s original plans.”

Copperwood Resources, a subsidary of Highland Copper, will be required to obtain wetlands permits from the Michigan Department of Environmental Quality before work on two of the sites (S5-06 and S5-09) on park land can begin.

“Highland Copper has applied for a wetlands permit to conduct additional work associated with exploratory drilling in the park,” said Steve Casey, Upper Peninsula district coordinator for the DEQ’s Water Resources Division. “DEQ staff is processing the application and will monitor all aspects of compliance with environmental laws if this project proceeds, including working with Gogebic County to ensure that appropriate measures are taken to control soil erosion.”

The three drill sites were among 12 expected to be explored last winter. However, after completing four test holes, work was interrupted with the arrival of unseasonably-warm February weather.

DNR permit provisions to protect park surface features dictated work could only be done when the ground was frozen, preferably with at least a foot of snow cover.

“Conditions of the DNR use permit will again require several important provisions be followed to prevent or reduce surface disturbance to park lands,” said John Pepin, DNR deputy public information officer. “This exploration effort will not be occurring in the wilderness section of the park, but in an area where several historic impacts have occurred, including logging and a narrow-gauge railroad.”

Other protective provisions include using existing roads to access sites when possible, using tracked vehicles and removing all drilling mud from work sites. The DNR will receive daily updates on the project.

Once the three sites are completed within the park, Copperwood Resources does not plan to drill the remaining five sites from its initial Section 5 exploration plan.

In addition, some additional drilling work is scheduled to be completed this winter outside of DNR-managed park lands. Two test holes (18_03 and 18_10) will be drilled from Copperwood Resources lands located west of the park, along the border of Section 5.

This exploration is occurring within a strip of road commission property – a 466-foot right-of-way – along either side of Gogebic County Road 519, which bisects Section 5.

Last spring, some erosion damage occurred in the right-of-way when the mining company, used a former snowmobile trail that parallels County Road 519 to access sites.

“This winter, we will be reaching sites directly from County Road 519 to help protect sensitive areas,” said Justin van der Toorn, exploration manager of Copperwood Resources Inc. “We are taking other measures, including drilling smaller diameter test holes, that will speed the exploration process.”

Boring depths will range from roughly 150 feet to 1,000 feet below the surface. Test holes are immediately filled with cement once drilling cores are removed.

Darren Pionk, Gogebic County Road Commission engineer-manager, said the agency will not allow the drilling of any holes in the right-of-way without frozen ground or near the spring thaw period.

The road commission permit also requires all work, and access to sites, be conducted in upland areas with no impacts to wetlands.

If Copper Resources eventually decides to extend the Copperwood Project, the copper deposit would be accessed from outside the park boundary, without disturbance to park surface features. Any potential mining of the minerals would require a separate regulatory process through the DEQ. Copperwood Resources would have to amend its existing permit.

“The DNR will ensure there would be opportunity for public review and comment before any mining would occur on minerals beneath the park,” Pepin said.

The mining company plans to complete its feasibility study of the project later this year.

For more information on the Copperwood Project in the western Upper Peninsula, visit www.highlandcopper.com/copperwood.

Conservation officers save woman from 70-foot cliff in Baraga County