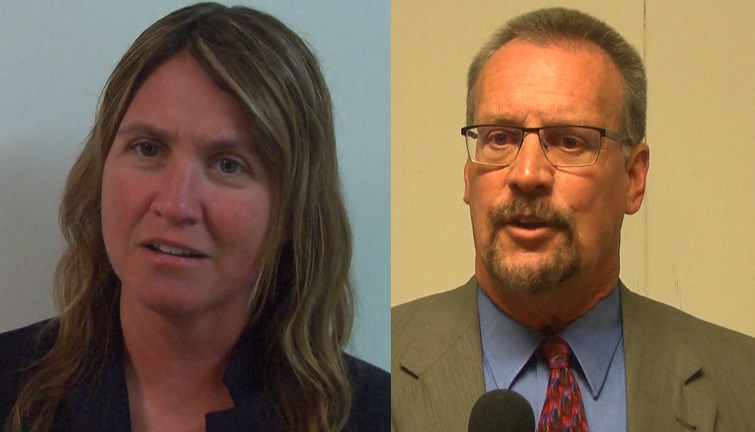 MARQUETTE — You’ve seen their signs and you’ve heard their names. You may have even seen them during a debate, or when they knocked on your door. But Tuesday, voters in Michigan’s 109th district will decide who will represent them in Lansing.

The race for the seat began back in May, after Representative John Kivela passed away.

“He was great to work with,” said Republican candidate Rich Rossway. “I think he kind of has led the way for how a politician, and when I say ‘politician,’ I think what I really mean is ‘public servant,’ how you serve the community. He was able to work on both sides of the aisle.”

“It’s been tough and you know, he had a lot of things he was working on. When the election’s over, the person that goes into office is going to have to get right to work to make sure we don’t lose the momentum that he started,” said Democratic candidate Sara Cambensy.

Cambensy and her team have run a campaign based around “Working for the People.”

Rossway and the Republicans have always said “U.P. First.”

“You know, we can’t identify themselves as ‘Republicans’ or “Democrats,'” he said. “Certainly, there are political persuasions and ways how we lean, but, you know, if you represent the U.P. first, that’s how we get things done,” said Rossway.

Both candidates share a passion for education. Cambensy is the Director of Adult and Community Education for the Marquette Area Public Schools and believes that corporate tax breaks, like the Dark Stores initiative, need to stop and everyone in the community has to “pay their fair share.”

Cambensy said “The funding that we’ve seen come back and the Governor’s report that tells us we’re underfunding education about $1200 per student, and what you look at what that can do in a community or in a school district, that’s huge.”

Rossway, who has been serving on the Marquette School Board for the last 17 years, agrees with Cambensy’s view that public schools in the U.P. are underfunded, but cites declining enrollment as part of the problem.

“Getting to Lansing, certainly one of my top priorities is going to be ‘How do we find better ways to fund our educational system?’ and in particular, schools with declining enrollment that are still high-performing districts, but because of lost enrollment, are losing funding,” he said.

The candidates are similar in another way – both experienced obstacles in their campaigns. In October, Rossway’s signs were defaced with blue swastikas.

“We try not to over-react to that and sadly, it’s just the political climate that we’re in right now and it probably gets far too much press than it deserves,” said Rossway.

A few days later, Cambensy responded to negative mailers sent out by the Michigan Republican Party.

“I can’t say I’m not disappointed in the negativity,” said Cambensy. “It worries me I guess how much control they [the Michigan Republican Party] want to have over the U.P. and this seat.”

The decision, however, is not up to the parties, but the voters themselves. Both campaign teams are still canvassing for the chance to represent the district.

“I want to represent the 109th because I think I can make a difference,” Rossway said. “You know, I’m 63 years old, so I think my motivation is not to develop a career, but rather to see if you can make a difference. And that’s really what I think about every single day.”

“I think it’d be an honor,” Cambensy said. “I think the legacy that all the previous legislators have had, the things they’ve gotten done for our district, being able to make that difference on the statewide level, would be an honor, a challenge and an one of the best opportunities that I think my skills could be used for going forward.”

To learn more about the candidates, visit their respective websites. Click HERE for Cambensy’s and HERE for Rossway’s. Don’t forget to vote on November 7th.