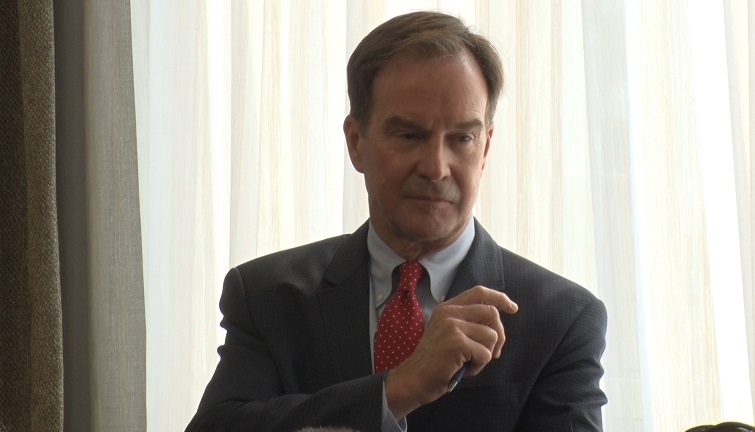 MARQUETTE — With a round of applause from the crowd, Michigan Attorney General Bill Schuette walked into a room filled with business leaders and key stakeholders at the Staybridge Suites of Marquette Monday afternoon for a roundtable discussion.

Two weeks ago, Schuette announced in his hometown of Midland he called the worst kept secret in America: he is running to become the next governor of the State of Michigan.

“My desire to serve is all about having Michigan win again,” said Schuette. “And I want us to cop an attitude. I want us to cop an attitude about Michigan’s future. I reject this kind of grudging acceptance or causal resignation that Michigan’s best days are behind us; no way. I want to make sure that Michigan leads the nation in jobs, paychecks and growth.”

At the luncheon, Schuette talked heavily about the economic agenda he would push as governor, including the elimination of an income tax and tackling auto insurance reform.

“What I want to do is get Michigan families a pay raise and a good way to start and start winning again, Michigan needs to win again, is eliminating the Granholm tax increase after all,” Schuette said. “We pay the highest auto insurance rates in America, about a $1,000 on average higher than any other state. I want to crack down on insurance fraud; I want to crack down on frivolous lawsuits and pass real auto insurance reform when I’m governor of the state.”

People who attended the meeting had the opportunity to speak with Michigan’s current attorney general about issues that are unique to the U.P., from energy prices, the status of Line 5, and more.

“I appreciated hearing from people,” said Schuette. “I’m running very hard to become Michigan’s next governor because I want to usher in a new era of jobs, opportunity and prosperity.”

The 63-year-old Schuette has served in various forms of public office for 27 years and counting. He’s been Michigan’s Attorney General since 2011.

Schuette’s stop in Marquette is part of a 30-stop listening tour throughout the state in 10 days.