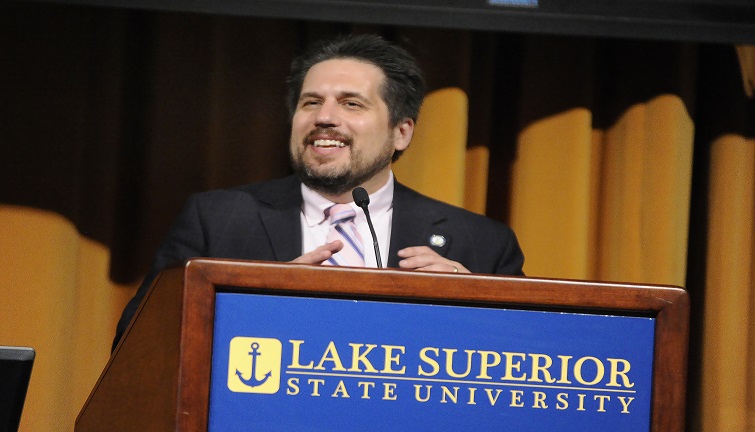 Dr. Pleger’s tenure as LSSU’s eighth president began July 1, 2014. Prior to moving to Michigan, he spent 21 years serving throughout the University of Wisconsin system, most recently as Campus Executive Officer and Dean at UW Baraboo-Sauk County. He held a doctorate in Archeology and Anthropology from the University of Wisconsin-Madison, and was a licensed archeologist specializing in the Upper Great Lakes region and the use of copper technology by prehistoric Native Americans.

“Dr. Pleger had an appreciation and understanding of the human condition, of the arts, and of global awareness,” said LSSU Board of Trustees Chairman Jim Curran. “Tom knew that the value of a higher education is much more than gaining credentials and potential earning power. It is a catalyst for empowering those around you to find opportunity and a pathway to a rich and fulfilling life. He embodied those values and his life stands as a testament to the example he set. It was an honor serving with him over the past two years as board chair.”

Dr. Pleger is the first president to pass while in office. Interim Provost David Roland Finley will be assuming day-to-day operations, assisted by a senior university team, until LSSU’s Board of Trustees sets the next course of action.

“Tom was a tremendous leader and advocate for LSSU as well as a personal friend,” said Finley. “His time with us was cut short, but his legacy remains through the many lives that he touched. The positive impact he had on this campus will be felt for many years to come.

“I extend my profound condolences to Teresa and the family. On behalf of the university, we ask that you keep the Pleger family in your thoughts.”

On Wednesday, May 4, Dr. Pleger was taken to War Memorial Hospital in Sault Ste. Marie and subsequently transferred to McLaren Northern Michigan Hospital in Petoskey, where he was evaluated through Thursday and underwent surgery Friday, May 5. He was in the ICU recovering with family before passing early Sunday morning, May 7.

As president, Dr. Pleger was a guiding force in the implementation of campus initiatives, including the development of a One Rate tuition plan that is now used as a model for several other universities across the country. As a determined promoter of higher education, he spoke of the importance of a broad education in the liberal arts, and of the public good of higher education.

Under his leadership, the LSSU navigated its R.W. Considine Hall Renovation project towards completion, gained reaccreditation from the Higher Learning Commission, and addressed structural deficits and long-term financial health. A leader in the state, Dr. Pleger was not only able to secure capital outlay funding for the proposed Center for Freshwater Research and Education, but served as well with distinction on Gov. Rick Snyder’s 21st Century Economy Commission, the only member from the Upper Peninsula.

Dr. Pleger encouraged collaboration throughout the region, meeting regularly with presidents of neighboring colleges and universities. As a result, Dr. Pleger, along with the presidents of Northern Michigan University and Michigan Technological University, received special recognition from Gov. Snyder at the 2015 Economic and Education Summit.

As a local and campus community leader, Dr. Pleger was known for being upbeat, friendly, and always willing to crack a few jokes. He was approachable and often met personally with prospective and current students to provide a listening ear or give life advice. He would often joke that he had the best job in the world because he never had to leave college.

Details on funeral arrangements and upcoming campus memorials will be announced shortly. Donations to a fund in Dr. Pleger’s memory will be coordinated through the LSSU Foundation, 650 W. Easterday Ave., Sault Ste. Marie, MI 49783.  https://foundation.lssu.edu/give-today/