The Superintendent of Forest Park Schools, Becky Waters has released a statement regarding the alleged assault allegations from one student. 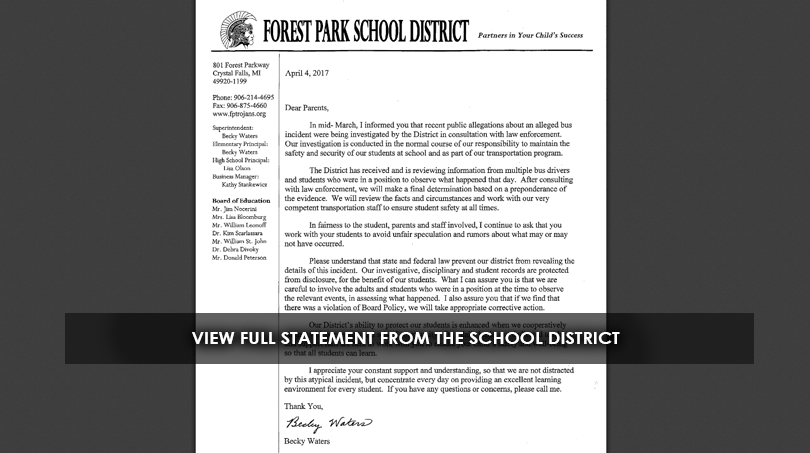 CRYSTAL FALLS — Almost a month ago, a 9-year old student was allegedly assaulted by a bus driver. ABC 10 reached out to the Father of the boy involved and we have the details.

“It was more of a public humiliation for my child and as a result, he is afraid to come to school,” said Father of 9-year old student, Tim Daniels. Around a month ago, a 9-year old boy was allegedly picked up by an unknown bus driver and carried 268 feet before being placed on the ground.

An alarming mishap of sorts by the school’s bus drivers. “The bus driver of the bus involved had asked my son to move to a different seat because of disruptive behavior that we later found out was from a different student. This student came forward later and said he was the issue,” said Daniels.

Once the child was left at the school, he allegedly wasn’t allowed access to call his Father for over 15 minutes after the incident. This day has left the student scarred. “The school should be a safe place for children to come and it baffles me that my son is afraid to come to school or stay in school,” said Daniels.

As a result of the incident, the student is seeking outside professional help for trauma related disconnectedness. The student’s siblings who attend the same school are also allegedly facing consequences. “They’ve been trying to make it harder for my kids while they are here at this school. My kids expressed that since it happened, the staff has been less than compassionate towards them and the situation. They are almost going out of their way to make it more difficult for the children,” said Daniels.

After attempting to reach out to the school for answers, this single Father of three has been left in the dark. “It feels to me that the first step should have been an administrative leave for the driver, and as far as I know, nothing has happened to the driver,” said Daniels.

Student witnesses have assisted with shedding light on details of the situation, but for the Father of a son who is now terrified of attending school, he thinks more should be done. “When an instant like this occurs, it should be taken very seriously and shouldn’t be just shuffled under the rug, it should be addressed immediately,” said Daniels.

In regards to the next step of action being taken by the Father, the Crystal Falls Police Department is currently investigating the situation and Daniels wants his children to be able to continue attending this school. “I’m trying to work with the school in order to correct the situation, however they have been less than cooperative,” said Daniels.

ABC 10 also tried reaching out to the Superintendent of Forest Park schools, but was informed that there will be no comment at this time.

The Sault Ste. Marie International Bridge is once again home for a pair of Peregrine Falcons