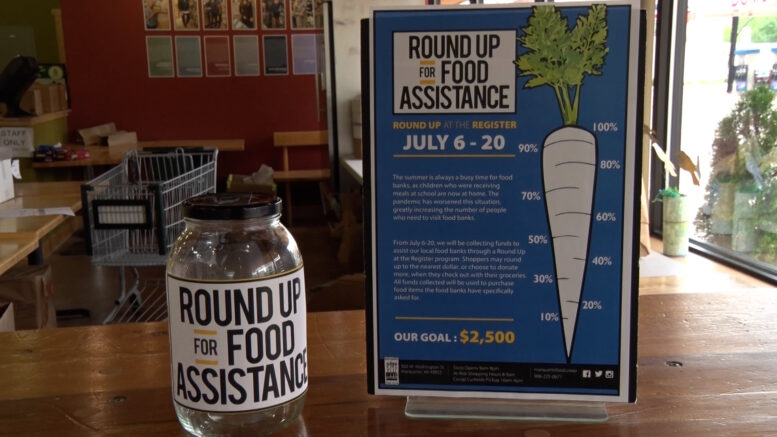 MARQUETTE — A local food co–op is helping local food pantries, by asking the public to pay just a little more at the register.

The Marquette Food Co–op is launching “Round Up at the Register,” a program that asks patrons to round up their grocery totals to the nearest dollar, with the difference being donated to a local food pantry.

According to a co–op representative, the program comes at a time when assistance is needed most.

“What we’re trying to do is support them during a time when any summer they would be feeling a little bit higher volume of people coming in, simply because students who would’ve gotten those extra meals at school are now eating at home,” said Sarah Monte, Director of Community Outreach for the Marquette Food Co-op. “So food banks tend to see a rise in the number of people using them in the summer. Additionally, now of course this year, we have COVID–19 and all the effects that that has had on the economy.”

Monte also attributes rising food costs to the strain people and food banks have been put through; April of 2020 saw the highest spike of food costs in 45 years.

The Marquette Food Co–op takes the donated money and purchases food for the food banks directly from suppliers, which gets pantries filled up for less money. Patrons can also donate more money if they wish, or donate via a jar in the store.

The Round Up at the Register program lasts until July 20th, and will donate to St. Vincent de Paul, the Salvation Army (Ishpeming and Marquette locations), and the NMU Food Pantry.