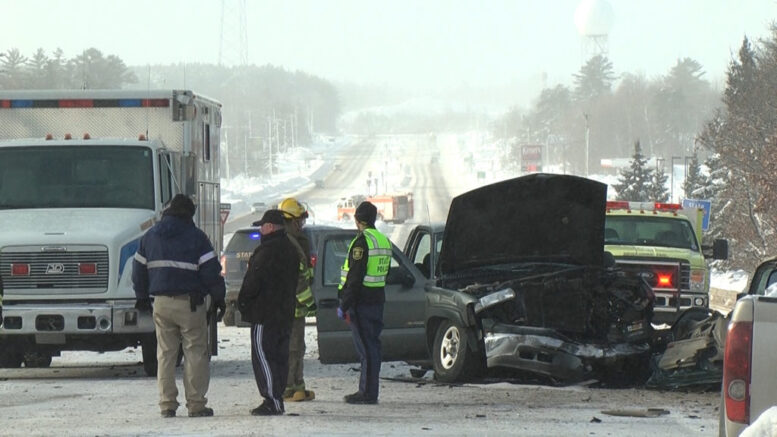 UPDATE — Yesterday the Negaunee State Police Post responded to US-41 east of Marquette Powersports in Negaunee Township in response to the report of a three-car personal injury crash. The Trooper’s investigation revealed that an east-bound pickup truck on US-41 lost control, crossed multiple lanes of traffic and struck two separate passenger cars in the west-bound lane of US-41. All vehicles were singly occupied.

The pickup truck was operated by Gary Gerard Perala of Negaunee, MI. Gary was transported to UPHS of Marquette for an apparent non-life threatening head injury.  The other drivers were identified as Leah Shanzi Ring of Marquette, MI and Donna Fay Eliassen of Negaunee, MI. Donna was also transported to the hospital for lower body injuries as she was entrapped in her vehicle and advanced extrication resources were utilized to remove her. Leah was checked by UPHS paramedics on scene and released. No citations were issued as the investigation is pending.

Troopers were assisted at the scene by Negaunee Township Fire/EMS, UPHS-Marquette EMS and the Marquette County Sheriff’s Department/ Rescue.

NEGAUNEE TOWNSHIP — A major accident slowed down traffic on US-41 in Negaunee township just before noon today.

A trooper on the scene said that the preliminary determination was that a pick-up truck driving in the east bound lanes of US-41 possibly lost control and entered the west bound lanes.

The pick-up truck then was struck by two different vehicles that were travelling west, a Jeep and a sedan-style car.

Three people, one from each vehicle, were injured in the crash and were transferred to UPHS Marquette by the UPHS Ambulance.

There is currently no update on the condition of the individuals that were injured, and the incident is still under investigation.

Traffic has been opened back up to all lanes in both directions.

ABC10 will continue to update this story as more information becomes available.

One person injured in Baraga County US-41 crash