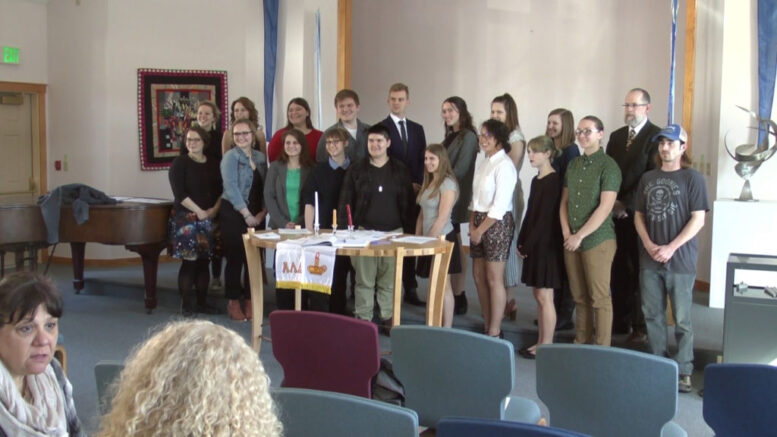 HANCOCK — A dozen Finlandia University students have been recognized for their outstanding efforts as their first year of college nears completion. Twelve of the university’s freshmen were inducted yesterday afternoon into its local chapter of a National Honors Society.

“We founded Alpha Lambda Delta on campus four years ago. It’s really exciting to see every year our new group of freshmen, our high academic achievers get recognized for that achievement” said Finlandia University’s Dean of Education, Erin Barnett.

These are twelve individuals who are off to a great start in their college careers.

“They need a 3.5 or higher GPA and they need to be in the top 20 percent of our freshmen class” said Barnett.

“I got it because my very first semester, I was here for the summer Bridge Program and I got a 4.0 in it. So they were like ‘that technically counts.’ So that’s how I got in” said Former Alpha Lambda Delta President, Annie Jo Wills.

“Two of those initiated today are student ambassadors as well on campus so they’re already in a leadership role” said Barnett. “We expect to see many of them serve as orientation leaders, RAs down the road and continue to contribute and find their place at Finlandia and develop as student leaders and as role models for their peers”

Kayla is one of this year’s inductees.

“It means that there’s a society that I’m a part of that I get to help out with any volunteer stuff, any of the community services that they want to organize. I get to put it on any applications, which looks really nice” said First year English student, Kayla Godin.

“They’ll also be eligible for Alpha Lambda Delta scholarships for graduated school for study abroad so this organization opens some doors for them they may not have had opened otherwise” said Barnett.

Many of the inductees will take community leadership roles with upcoming outreach programs like Bowling for Kids or Toys for Tots.

“But once you’re in it, you’re in it for life. Even if your GPA kind of falls they encourage you to do better. They don’t really kick people out. It looks really, really good on resumes. And it’s a cool thing to be a part of because it’s like ‘I’m part of an Honor Society, a nation-wide Honor Society.’ It’s really nice” said Wills.

“I’m just really proud of these students. They’ve worked really hard. The first semester of college is very challenging, so to see them be successful and get recognized for that is important. And then four years from now they’ll be graduating and they’ll have their medallions on and they’ll walk across that stage and continue to be recognized for that academic achievement” said the University’s Dean of Education.