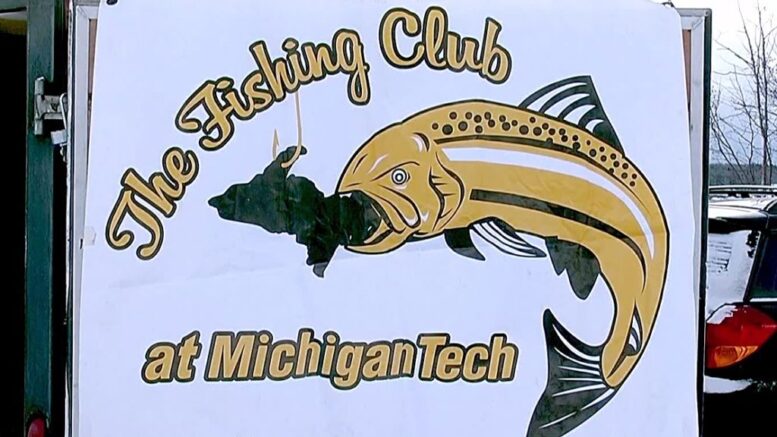 CHASSELL — The coldest weekend so far this winter may have prevented a few fisherman from making their way to Chassell Bay Saturday morning, but several toughed out the frigid temperatures an competed in an annual ice fishing tournament, held by Michigan Tech’s Fishing Club.

They say a bad day of fishing is still better than, well, just about anything. That seems to be the consensus, among a couple dozen fishermen and women who are not even phased by the single digit temperature.

“We’ve got about 23 anglers out, all in for longest length of five fish,” said Lukas Evans, Vice President of the MTU Fishing Club.

Evans’ job Saturday was sitting here on the lake shore and waiting for someone to call in their catch. Lukas is measuring and charting each one as the biggest fish takes home some cash.

“Everyone is out after Pike, Crappie, and anything they can get their hands on right now,” said Evans. “It’s a 50% cash pay out so we should be able to get a pretty big pot of money for first place. It should be about $200 is what I’m assuming right now.”

For some the day is just about just having fun on the ice with friends. This group of tech students, aren’t catching many fish, but like any engineering student would, they’ve modified the protective grill on their portable propane heater, and it now makes hot dogs quite nicely, even with a slight breeze in 5 degrees.

“There’s a lot of fisherman up here seeing as how we’re in the UP and a lot of people like to fish, so there’s a spark of interest for fisherman and a bunch of college kids got together and we made the fishing club happen.”

This year’s event is lightly attended. Lukas believes there’s an obvious reason for that.

“We had about 52 people registered for this tournament last year,” said Evans. “The numbers are a little down this year, but it’s pretty chilly this morning.”

For others, the fish are biting just fine. Experience and some innovative tools, could be to credit. This group is using an electronic wireless transmitter that tells the fisherman when he has a bite.

“So the whole purpose is just to get quick notifications and stuff,” said Gregg Haensgen, an inventor with Vulture Systems.

Gregg Haensgen invented the device and now makes a living manufacturing them. With multiple tip ups on the ice, the fisherman wears a receiving collar that beeps when fish has taken the bait, and that beeper also tells him which fishing hole to check. Haensgen says that the apparatus is also used to assist trappers.

“We have long range sensors that people use for trapping, for bank fishing, for tip ups, tip downs, a lot of different applications,” said Haensgen. “So you can be sitting in your shack, what’s nice is they’ll go right through this metal shack here, just like a little bit ago when we had that flag. So that’s kind of the whole purpose of our system- so you can get to your fish right away. Less chance of gut hooking him and things like that.”

Fishing is a year round sport for the club, once the ice thaws the group puts away the ice shanty, and pulls out the boat.

“During the summer we do bass tournaments,” said Evans. “We have a club fishing boat that tours the state of Michigan and goes around and does fishing tournaments for bass. In the spring we do a steelhead tournament down in Baldwin, Michigan. We all road trip down there. Throughout the winter we hold ice events, such as this. We’re a group of guys that likes to go out and catch some fish.”

MTU to host after school science and engineering classes