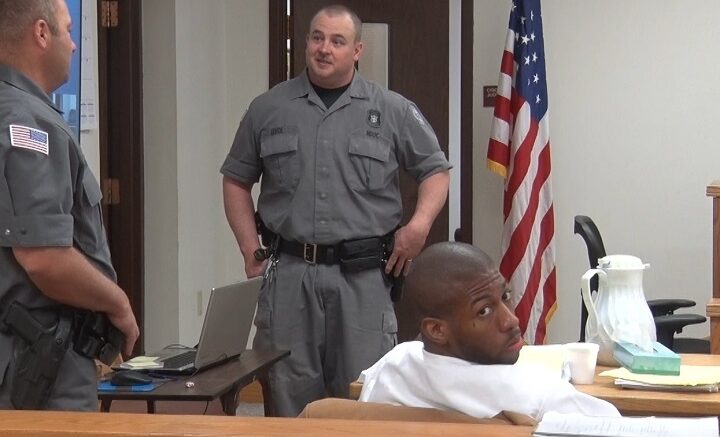 MUNISING — DeShawn Madden’s trial continued Thursday in Alger County Circuit Court. The jury began the day with a tour of the Alger Correctional Facility and then came back to the courthouse to listen to day four of testimonies.

During Michigan State Police Detective Sgt. Jeremy Hauswirth’s testimony this morning, a recording of his conversation with Madden was played for the jury, which took place after Burks was found dead. Madden says in the recording that he’s doing too much time in prison to have a homosexual cellmate and if one of them was not moved out of the cell, there was going to be a “blood spill.”

He also told the detective about a conversation that Sgt. Hauswirth presumed was between Madden and Burks:

“‘Listen, man, might as well get up out of here. For real.’
He goes ‘I ain’t going nowhere.’
‘Alright, well get me up out of here, tell ’em we’re having problems here.’
‘I did already, they ain’t gonna move you.’
Then he touched my TV. That was the end of it.”

According to a testimony from Investigator Douglas Hansen, Madden stated that a fight broke out when Burks refused to move out of the cell.

Hansen then testified that Madden slapped Burks. Burks then swung his arms in a windmill motion. Madden then punched Burks in the head, which Pathologist Dr. Martin Matthews believe caused his death.

“Well, we see this kind of thing in car mobile accidents, frequently when they stop and hit their head hard, when there is a collision for instance. That’s the kind of force we’re talking about,” said Dr. Matthews.

According to Hansen, after Burks was hit in the head, Madden stated he then put Burks in a choke hold until he lost consciousness.

The jury is expected to reach a verdict as soon as tomorrow. Stay with ABC 10 for the conclusion of this trial.

Prisoner kills cellmate because of his sexual orientation