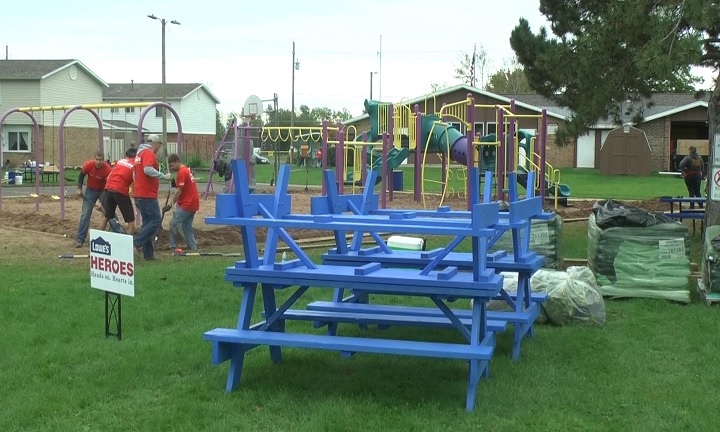 MARQUETTE — Kids that live in the Lake Superior Village won’t be able to use their playgrounds Thursday, but that’s because they are being renovated. Through the “Lowe’s Heroes” project, employees at the Marquette Lowe’s are working to make the two on-site playgrounds safer and more attractive.

“We are so grateful. The playground has been needed to be brought up to grade for the safety of the kids since I’ve been here, and I got here in March of 2015,” said Lake Superior Village Project Manager Sarah Fogaroli. “I reached out to Lowe’s for the ‘Lowe’s Heroes’ program and Lowe’s responded ten-fold.”

The Marquette Lowe’s donated $3,500 of material, along with their time and labor. They also contacted Smith Construction, who gave two truckloads of sand for the playgrounds, and the local Sherwin Williams store, who contributed some paint, to help get the job done.

“This was a larger project that we decided to do as a local store. Our employees got together and said ‘You know what, what a great project,’ and that’s why we’re here today,” said Marquette Lowe’s Store Manager Mark Byczek. “It’s awesome, it’s great helping out the local community. It’s not just our Lowe’s, it’s our local employees that are really making a difference.”

Fifteen Lowe’s employees and many employees from the Marquette Housing Authority worked together to improve the playgrounds, re-paint signs and plant flowers.

Lake Superior Village is more than happy with the neighborly gesture.

“It’s going to be a huge help the community and the neighborhood surrounding Lake Superior Village and we’re trying really hard to take good care of it and have it look as best as it can,” said Fogaroli.

For more information on the “Lowe’s Heroes” project,  click HERE.