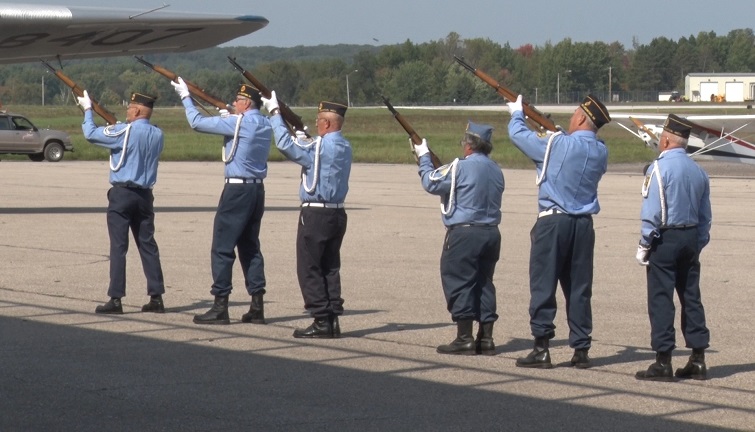 KINGSFORD — Friday was a special escort for two very special veterans. The men served in World War II and were both Prisoners of War.

They were honored in Kingsford as part of National POW/MIA Recognition Day.

“Freedom is not free. We estimate that 20,000 POWs still in America, former Prisoner of Wars,” said James Rice.

National POW/MIA Recognition Day is held annually on the third Friday of September. For James Rice, director of the Oscar G. Johnson VA Medical Center in Iron Mountain, this day has special meeting.

“It’s a privilege for me. My grandfather was a POW in World War II, so this gives me a way to connect back with somebody he served with,” said Rice.

John Moddie was one of the veterans honored at the event. The 92-year-old Quinnesec man served in the U.S. Army and was captured during the Battle of the Bulge in December of 1944.

He experienced being lined up with other POWs in front of a German machine gun. Thankfully, that weapon was never fired at him or the other POWs.

“Well I wish they’d kind of remember people who were in the battles that they appreciate all that they did for their country,” said Moddie. “I appreciate everybody that came up and shook my hand,” he added.

“Knowing what he went through to serve his country, this is the happiest day for him. He’s really enjoying it,” said Betty Ann Stewart, Moddie’s daughter.

“There are few things as sacred to me as duty, honor, country, flag,” said Laura Branz, a Medical Center POW Advocate. “My heroes are the men and women in uniform.”

“These guys paid a tremendous cost serving our country and being held captive against their will is a tremendous sacrifice they made,” said Rice.

American Legion Post 50 and the Combat Veterans Motorcycle Association participated in the event.