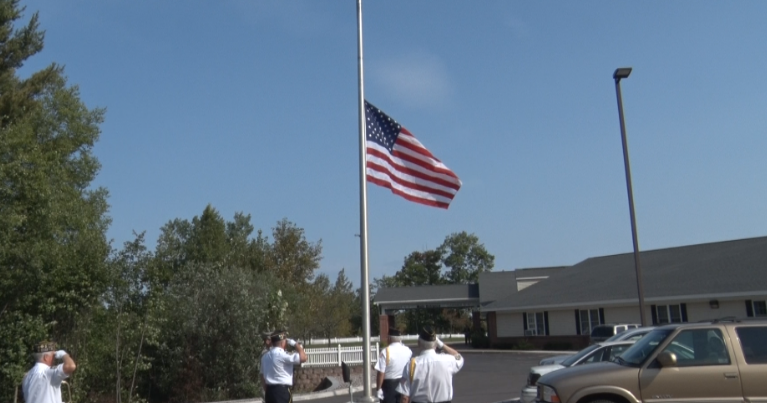 MARQUETTE — 16 years ago on this date, the nation came together as one following terror attacks that killed nearly 3,000 Americans. Today in Marquette, local soldiers and veterans remembered those who have paid the ultimate sacrifice for our country.

Veterans from American Legion Post 44 gathered at Brookridge Heights for a flag raising ceremony. Patriot Day is a time for Americans to reflect on what happened the day of September 11th, 2001 and honor all the soldiers who put their life on the line to protect our country.

Many residents of Brookridge Heights attended the ceremonies to show their support for military personnel.

“Well certainly Patriot’s Day is an important day for all of us. Most of us can certainly remember exactly where we were on 9/11 when the events started to take place. Our residents here at Brookridge Heights are very patriotic individuals who often grew up during the depression and then on into World War Two so patriotism is a very strong part of their make-up, said Brookridge Heights Executive Director, Neal Crothers.

Following the flag raising, was a fallen soldier ceremony conducted by an active military member who honored those who have fallen on behalf of the countries freedom.

Veterans return to a warm welcome