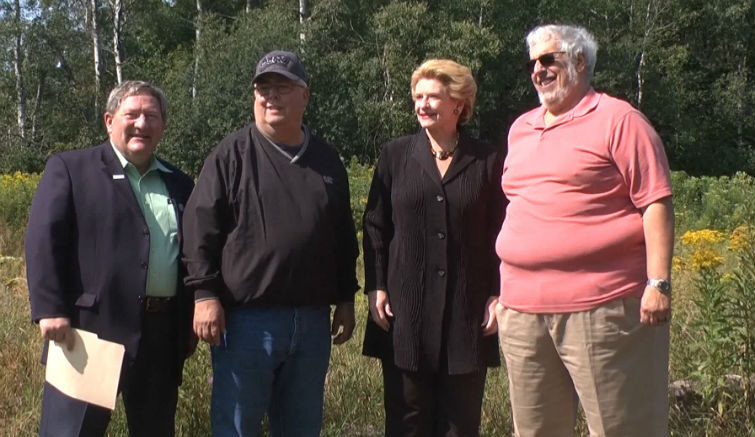 ISHPEMING — Ishpeming City Officials greeted Senator Debbie Stabenow at Partridge Creek this afternoon as she discussed the importance of the Great Lakes Restoration Initiative for the city and the state. ABC Ten’s Chelsea Birdsall has the details.

“It’s our job to make sure people understand that the Great Lakes are an incredible natural resource,” said Senator Debbie Stabenow (D-MI).

The Great Lakes accounts for twenty percent of the world’s fresh water and funding from sources such as the Great Lakes Restoration Initiative (GLRI) serve to preserve and protect the water. But the GLRI has been the talk of Michigan and the surrounding states as President Donald Trump considers cutting the funding for it in the future.

“I’m surprised the administration doesn’t understand,” Senator Stabenow said. “We have 40 million people who get their drinking water from the Great Lakes as well as hunting, fishing, boating, agriculture. Frankly, it’s just our way of life.”

The GLRI was a topical focus for Senator Debbie Stabenow this afternoon as she stopped in Ishpeming to admire one of the many projects funded by the program at Partridge Creek. A dual-phased project started in Ishpeming in 2012 and continued in 2014 to remove a source of mercury from Deer Lake. The costly project rang in at $8.7 million dollars, but it may not have been possible without the $8 million from the GLRI.

“It’s a terrific project that benefitted so many people – the City of Ishpeming benefitted greatly from it in the form of revitalization of infrastructure in our downtown that was done in association of this project,” said Ishpeming City Manager, Mark Slown. “It was a great project for the city but it also had great environmental benefits.”

The battle to keep the GLRI fully funded has been a bi-partisan issue with both sides of the aisle working to keep it in place. But the budget is yet to be finished, a feat Congress will be tackling when it reconvenes next week.

“If we’re successful-and we’re not completely done, but so many people have joined us in the fight-I think we’re going to be okay this year,” Senator Stabenow said. “We’re going to have to keep watching it every single year.”

As a Co-Chair of Great Lakes Task Force, Stabenow says she is very focused on problems involving the Great Lakes, including the need for a Soo Lock upgrade.

“We’re really on borrowed time on the locks. We need to get a second lock. It’s also a huge jobs project for us and so we need to get that done,” said Senator Stabenow. “That is something that is a bi-partisan priority for Michigan and I’m glad to be leading the charge on that in the delegation.”

Councilman resigns from appointed seat, sworn in to elected seat