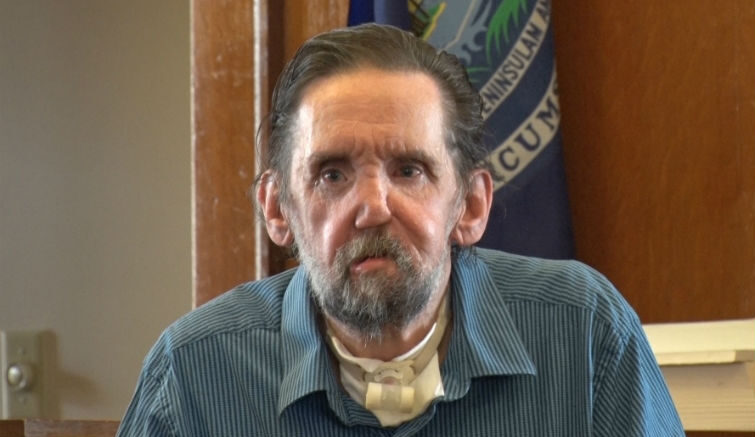 CRYSTAL FALLS — A sigh of relief from the victim’s family as the jury found 66 year-old Alfred Saario guilty of first degree murder and discharging a firearm at or near a building. This verdict was delivered after three and a half hours of deliberation about whether Saario’s claim of self-defense in the shooting death of his 29 year-old step daughter, Jamie Lee James, was legitimate and truthful.

Just hours before, Iron County Prosecutor Melissa Powell and Saario’s Defense Attorney, Henry McRoberts, addressed that very same jury for closing arguments. Powell recapped the week of testimonies, claiming that while James may not have been an angel, taking a cell phone without permission in a house she most definitely had permission to be in from her mother was not enough reason to, “drop her like a deer.”

“Two wrongs don’t make a murder right,” said Powell. “He isn’t Clint Eastwood and this isn’t a movie. Our journey is nearing its end. You have heard how one pull of a trigger has devastated an Iron County family. You’ve heard how Jamie James died in the hands of someone who designated himself judge jury and executioner.”

Powell asked the jury to find Saario guilty of first degree murder, saying he had plenty of time to consider his actions because, as he testified, the whole ordeal took all of three minutes between the incident itself and pulling the trigger that ultimately led to the death of his step-daughter. As pre-meditation is needed to convict on first degree murder charges, Powell had the jury and court room sit in silence for three minutes to show how much time Saario had to think about what he was doing.

“Setting it at three minutes ladies and gentlemen, we’re going to mark off three minutes and see exactly how long that is,” said Powell. “That’s 30 seconds… that’s one minute… two minutes,” Powell went on.

McRoberts took the podium and painted a picture of an aggressive and violent woman with a history of breaking the law and documented physical altercations with the defendant over the course of the last 13 years and that his client was merely acting in self-defense.
That paired with the high drug levels found in James body during the autopsy shows she could have been in an altered state during the incident that led the defendant to fear for his life, according to McRoberts.

Powell rebutted, arguing that the drugs in the victims system were sedative in nature, as testified by the pathologist who conducted James autopsy. Powell added in her argument that not only was James not armed during the incident, but she was shot in the side, not straight on, proving James was not approaching the defendant in a threatening manner.

An X-ray conducted post-mortem during the autopsy confirmed this, showing two entrance and exit wounds from a single bullet traveling right to left through the victim’s body. The jury did not buy the self-defense claim but also did not find that the shooting was premeditated so they chose to find him guilty on just second degree murder.

Saario will be back in court on September 21 for his sentencing.

Alfred Saario has been found guilty of second-degree murder and discharging a firearm in or at a building. We’ll have more tonight on ABC 10 and ABC10UP.com.

CRYSTAL FALLS — The fate of an Alpha man accused of murder is now in the hands of the jury.

Alfred Saario, 66, is charged with open murder and discharging a firearm in or at a building causing death. He stands accused of shooting and killing his stepdaughter, Jamie Lee James, 29, on June 23rd, 2016.

ABC 10 has a reporter on scene awaiting the verdict. We will bring the verdict to you tonight at 5:30 and 6:00 pm tonight on ABC 10 and ABC10UP.com

Chilly plunge for a special cause

Despite report, movie theatre not closing

Where Should Calumet Go with Air Service?