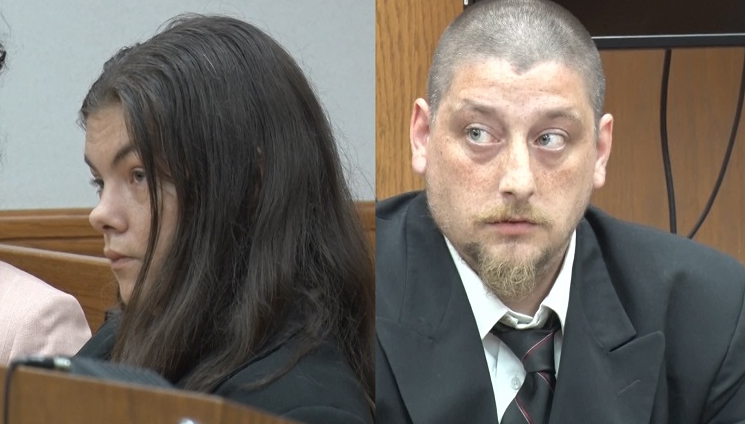 ESCANABA — “The Court finds each parent poses a significant risk to these children, and the Court has no confidence that the department, or anyone else, is capable of making them or their home safe for the children to be returned to.”

In a 36–page written opinion that took well over an hour to read, Judge Robert Goebel terminated the parental rights of Michael Lavoie and Tammy Fryer. They will no longer have any access or communication with their two daughters, ages four and five.

Back in March, the couple’s then 3–year–old was found by a dog naked in a ditch. It was 32 degrees outside that day.

How the child got there has always been a major question. Judge Goebel dropped a bombshell statement about how the Court believes that child was able to get outside.

“The Court finds one or both of the parents placed (the girl) outside while naked in 30–32 degree weather. If only one parent did so, the second parent at a minimum knew of this fact and did nothing to prevent it and has consistently lied to protect one another.”

Past incidents of neglect did not help Lavoie and Fryer’s case. Judge Goebel cited multiple oral surgeries for both girls due to neglect.

“They knowingly fed each child sugary treats knowing what exact harm would occur,” said the judge. “They further did not brush their teeth and they intentionally refused to provide routine medical visits and care as recommended to them.”

Also cited in Judge Goebel’s opinion were the consistent awful living conditions the girls were in. From feces spread throughout the walls to a residence being the worst home a sheriff’s deputy has ever seen, Judge Goebel went through a number of different complaints and investigations into Fryer and Lavoie since 2012.

“It is in the best interest of each child that the parental rights be terminated and no further efforts be made to reunite them with the parents,” said Goebel.

Lavoie and Fryer will have forty–five days to appeal the judge’s decision. Judge Goebel discussed the criminality that occurred in the children’s home and by each parent, citing first and second–degree child abuse.

Delta County Prosecutor Phil Strom stated on record that re found no criminality in the home or on the part of either parent. The two girls will eventually be put up for adoption.

ESCANABA — The parental rights for two Rapid River residents have been terminated.

Michael Lavoie and Tammy Fryer were on trial in Delta County Probate Court, concerning the living conditions their two daughters were found in by authorities. This comes after their 3-year-old daughter was found naked in a field by a dog back in March.

The future of the child will be decided by the court. Stay with ABC 10 on this developing story.