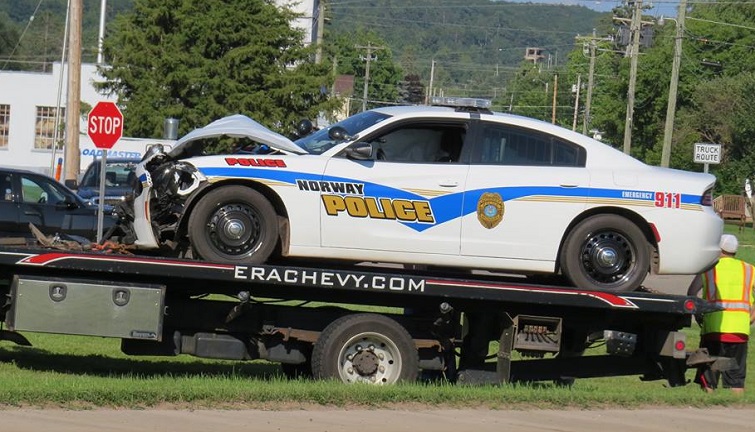 The Dickinson County Sheriff’s Office says an officer involved in a two-vehicle accident Thursday evening was not injured.

The accident occurred at 5:15 p.m. on US-2 near Ninth Avenue in Quinnesec. Police say a 19-year-old Quinnesec man turning onto Ninth Avenue did so right in front of an oncoming police cruiser.

The police cruiser hit the pickup in the rear passenger side, disabling both vehicles. No serious injuries were reported.

The driver of the pickup truck was found at fault in the accident. He was not issued a citation.

At this time, the accident remains under investigation.

NORWAY — Two vehicles were damaged- including a Norway Police cruiser- in an accident Thursday night in Norway.

According to an eyewitness, the accident occurred just after 5:00 p.m. C.T. near US-2 and Ninth Avenue, right next to Dairy Queen. The police cruiser sustained heavy front-end damage.

The other vehicle, a pickup truck, was also heavily damaged. Both vehicles were towed from the scene.

There’s no word on any injuries or who was at fault.

The Norway Police Department is unavailable for comment at this time. Stay with ABC10UP.com for the latest on this developing story.