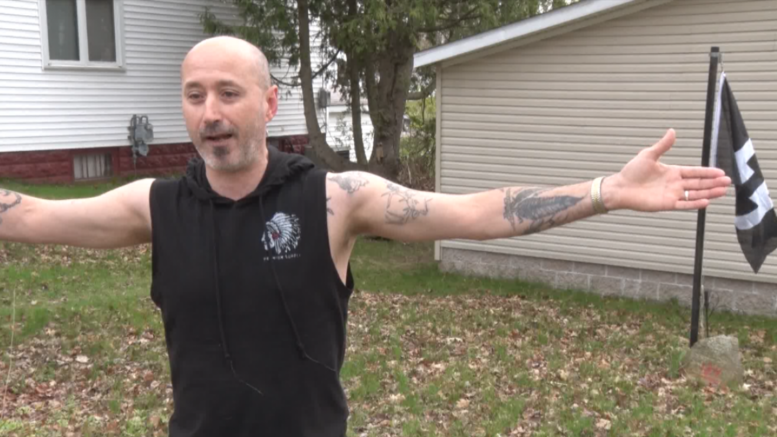 KINGSFORD — Tonight, a story brought to our attention by concerned community members in the City of Kingsford. One fellow resident is displaying a Nazi flag in his backyard.

The flag represents the Schultzstaffel also known as the SS, an organization responsible for killing an estimated five to six million people in the Jewish Community during the Holocaust. Although Jones feels his flag doesn’t represent racism, for others it gives off a different message.

“When it was brought to my attention of what it was, I literally woke up at three in the morning. I couldn’t sleep,” said neighbor Mattea Span. “I just had these thoughts in my head of him sitting there looking out the window at my kids, or my husband, thinking these thoughts, or even having these ideas. It is a much bigger problem then people make it out to be. A lot of stuff that goes on, and I just think it is ignorance.”

The flag was displayed directly across the street from a community playground. Jones claims the setting isn’t inappropriate and that he would even display it near a school.

“I fly it for anyone who ever fought in any war, it doesn’t matter who,” Jones said. “There is no such thing as racist flag people are using that flag for their own purpose those are the people that don’t belong in this world.”

Since our meeting this morning, the American flag is now hanging in its place as Jones frequently alternates his display.

According to Kingsford Public Safety the issue is out of their hands since it is private property. No formal complaints have been made to the city.

“I’m sick of all these people thinking just because someone flies a Confederate flag or a German flag that they’re racist, or they think that it is a racist statement F*ck yous, get off my a**,” Jones said. “People out in the world have their rights, freedom of speech. If you don’t like it don’t look at it, quit complaining about it.”