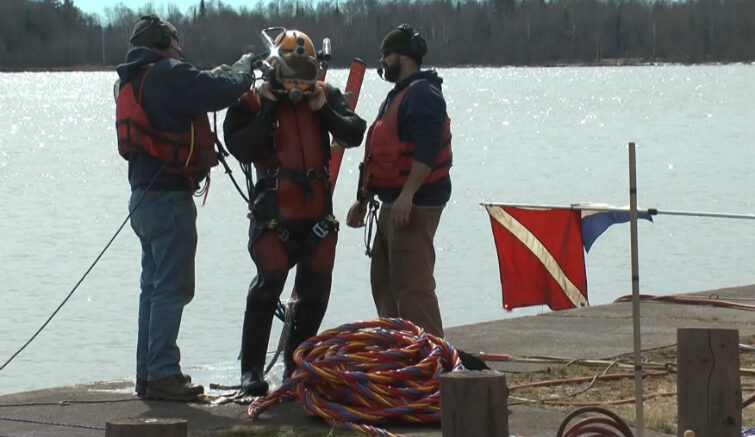 CHASSELL — The impact to the environment from a sunken fishing boat in the Portage Canal should be minimal. That’s the word from the U.S. Coast Guard who is conducting a federal pollution mitigation response to an oil spill in Houghton County.

Recovery and cleanup crews were on scene today near the South Entry of the canal, where a 36-foot fishing boat sank while docked. The commercial fishing vessel is owned by the Keweenaw Bay Indian Community and Coast Guard officials say the boat was properly winterized, which means there were no hazmat concerns at the site.

There was about 200 gallons of diesel fuel, oil and hydraulic fluid on board, but only about 50 gallons spilled into the water.

Marine Safety Technician 1st Class Jeremy Cowell of the U.S. Coast Guard, MSU Duluth, said, “With any oil spill on any freshwater ecosystem, there is concern, but due to the nature of the diesel-it being comprised of more lighter elements-it generally naturally evaporates within about two to three days, the vast majority of the product will.”

NOAA officials say they don’t believe there will be any affect on designated endangered wildlife areas or environmental sensitive areas. Divers are removing the remaining fuel from the vessel but the Coast Guard said any salvage operation will have to be conducted by the tribe.

Cleanup operations are expected to be completed this weekend.

Death of woman in Houghton investigated