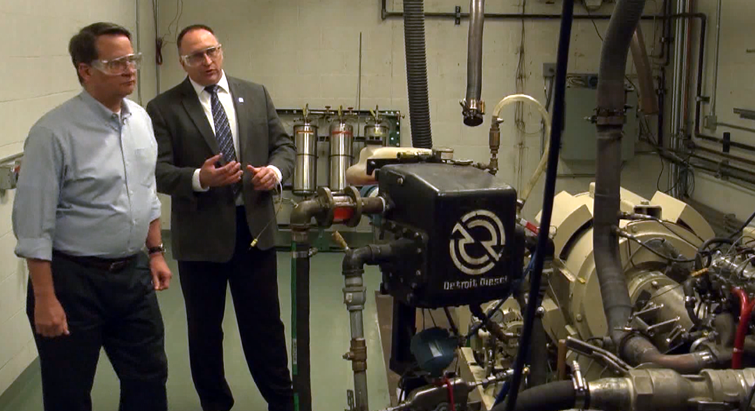 HOUGHTON — The state’s junior Senator paid a visit to a Michigan Tech research centers to get a firsthand look at autonomous vehicle technology.

Members of Congress recently sent a letter calling for a $200 million investment into the development of self–driving vehicles.

Senator Gary Peters said, “This is the future for the auto industry—self–driving, autonomous vehicles—and we’re seeing very stiff competition from Asian companies, from European companies that are developing this technology and one thing we know—whoever is first, is going to be at a competitive advantage and I want to make sure it’s the United States.”

Peters sat in a Chevrolet Bolt, which will soon be equipped with Eco–Routing and Informed Driver Information to allow the driver to make ecological decisions to improve their energy use on board.

Autonomous technologies are already in many modern cars, which means self–driving vehicles are not far off.

MTU Mobile Lab Operations Manager Christopher Morgan said, “There’s adaptive cruise control technologies, there’s collision avoidance technologies, and these technologies are really a stepping stone to get to fully autonomous vehicles. I think it’s not out of the picture to think that within five to ten years, we’ll have fully automated vehicles in the mainstream.

More than 35,000 people are killed on U.S. highways every year so this technology is expected to reduce accidents and save thousands of lives.

Huskies ready for battle vs. Wildcats

Huskies ranked No. 5 by USCHO.com