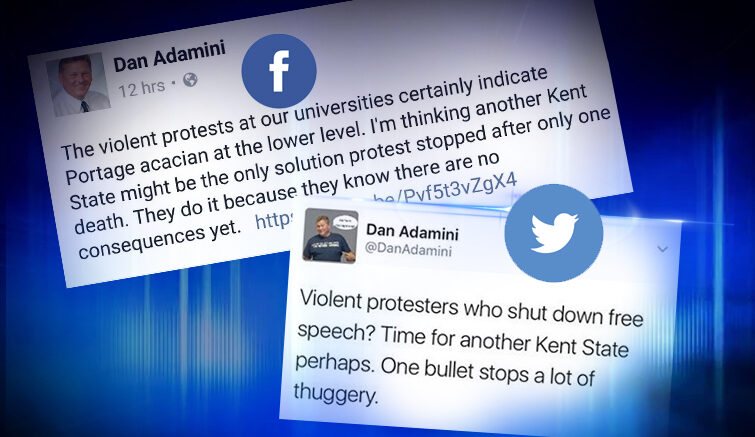 MARQUETTE — “For the good of the republican party in Marquette and Michigan I hereby resign my position as secretary,” said Dan Adamini in his resignation letter to the Marquette County GOP.

“The hatred being directed toward me because of my comments on social media is beginning to hurt others and I do not want that to happen.

“The threats and hatred do not appear to be dying down and I do not want to be a distraction to the important work that lies ahead. I will continue to support thde [sic] party, but will not do so in an official capacity for the forseeable [sic] future.”

The posts on social media by the secretary for the Marquette County GOP have caught the attention of people across the Upper Peninsula.

We talked one-on-one with the man who has since taken down those posts.

Dan Adamini was upset when he saw the recent protests at U.C. Berkeley.

“This was not a protest. This was a riot,” said Adamini. We had buildings being vandalized, we had people being beaten and assaulted.”

Like many Americans, Adamini took to social media to exercise his first amendment right, giving his opinion on the matter.

A tweet, posted by Adamini Thursday morning, said, ‘Violent protesters who shut down free speech? Time for another Kent State perhaps. One bullet stops a lot of thuggery.’

A protest in 1970 on the campus of Kent State University turned deadly, when members of the Ohio National Guard opened fire on people who were protesting America’s invasion of the Vietnam War.

“I think we need to crack down on the violence and then we can avoid what a lot of people were thinking I’m actually calling for, which is the shooting of these protestors, and that was not what I was calling for at all,” said Adamini.
His posts on Facebook and Twitter caused quite a firestorm.

“The Kent State Massacre left four people dead, nine injured and one person permanently paralyzed,” said Jason Chapman, chairman of the Marquette County Democrats. “We believe in peaceful protesting and that is the cornerstone of our first amendment rights. But when someone suggests the killing of innocent protestors, that is what we believe that there is a problem,” he added.

“Looking back I worded it very poorly,” said Adamini. “When I looked at the first post I knew what I was trying to say and I thought, ‘Ok that sums it up in my mind.’ Looking at it now I certainly wished I would’ve worded it differently because I can see how people got the impression that I was actually calling for violence,” said Adamini.

Adamini is the secretary for the Marquette County GOP and has a radio show, ‘In The Right Mind’ that airs Saturday morning on WDMJ and WIAN in Marquette.

We reached out to both outlets, who released statements about Adamini’s comments.
Brendan Biolo, the chair for the Marquette County GOP, said “We would never advocate for violence. No one is for physical violence.”
Sovereign Communications, which airs Admini’s radio show, said “Dan’s show is an independent show. His views do not express the views of Sovereign Communications.”

Adamini did take down the posts and has since issued retraction statements.

“I think it’s better off to let Facebook be what it was intended to be; a way to keep in touch with folks. I may or may not put the page back up,” said Adamini. “The show page is still there, so if people want to vent their hatred at me, go to it. That’s what it’s for.”

His controversial tweets last week are making headlines at the national level.

The secretary of the Marquette County Republican Party has since deleted or deactivated all of his social media accounts.
Kent State University also issued a statement this weekend, inviting Adamini to the university to tour the May Fourth Visitors Center, to gain perspective on what happened 47 years ago, where four people lost their lives during a protest concerning the Vietnam War.