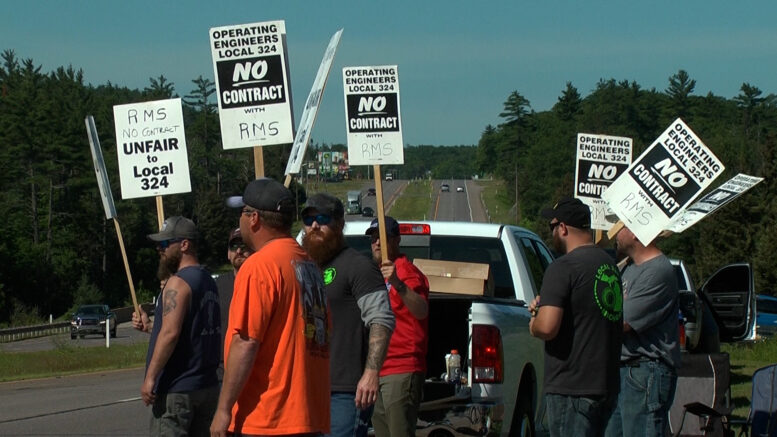 NEGAUNEE — A group of union workers held a strike on the morning of July 13 in Negaunee.

A dozen members of the local OE 324 Union gathered outside Road Machinery & Supplies Co. on US-41.

The group works in the service department as mechanics, and they are on strike until they can get a contract with RMS. They say they’ve made attempts to get a contract in the past, but to no avail.

“We’ve been working without a contract for almost a year now,” said Mat Bourdage of OE 324. “And we’ve been in negotiations to try and better our retirement, and it’s going nowhere. So we feel that this is our last resort to get a fair deal. We work really long hours and work really hard, and we should be able to retire without having to work our whole lives.”

This was the first day the group stood outside RMS to strike, and they say they will continue to strike every day until they get a contract with the company. They encourage other union members who support them to join them.

ABC 10 reached out to RMS CFO Troy Johnson for comment. Johnson said the company was engaged in discussion with the workers striking late last week surrounding their current pension plan through the union, which is at a critical status.

Johnson said they are disappointed, but that they recognize their workers’ right to strike and share their frustration concerning the contracts. He added that RMS hopes to resume discussions when those striking are prepared to do so.

Company looking for nurses to fill in during strike