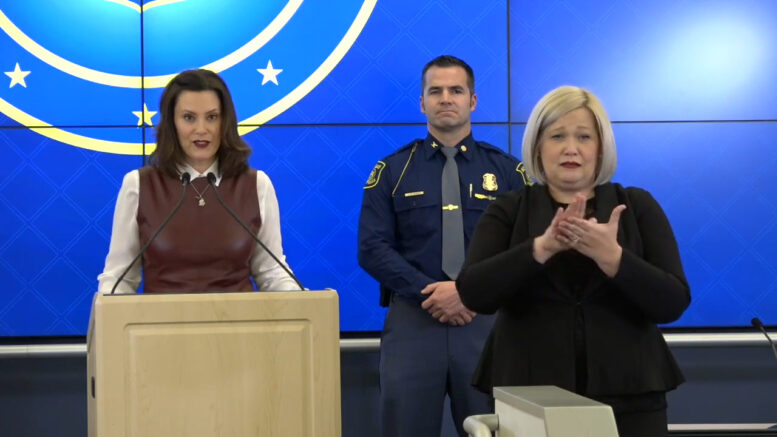 LANSING — Many questions surround how the state of Michigan is responding to the COVID–19 pandemic, and today Governor Gretchen Whitmer addressed some of those concerns.

In a press conference held Friday afternoon, Governor Whitmer talked about some of the actions both she and the state of Michigan have taken to curtail the spread of COVID–19.

In the press conference, the governor mentions how she sent a letter to President Trump, requesting federal funding for the full use of the Michigan National Guard. Despite rumors circulating about this move, Governor Whitmer assured the public that the National Guard would be used for humanitarian work only.

“I want to be very clear. There has been a lot of misinformation and rumors floating around,” said Whitmer. “I’m asking for funding for National Guardsmen and Guardswomen to help distribute food and supplies. Humanitarian missions. I am not calling for martial law. That is a rumor, and that is false.”

Also addressed at the press conference was the use of shelter-in-place policies, such as the ones in place in New York and California. While the governor didn’t rule out the possibility of implementing such a policy, she added, “…we will consider doing that when the time is right, but we are not there.”

According to new numbers released Friday, 225 new cases have been reported in the state of Michigan, bringing the total to 549 confirmed cases, with two deaths.

The governor also encourages anyone with questions or concerns to visit the website michigan.gov/coronavirus.