UPPER PENINSULA — Memorial Day isn’t just a three-day weekend to help kick off summer. On this day, it’s important to remember those who have fallen in battle for our freedom.

The Oscar G. Johnson VA Medical Center in Iron Mountain, held their annual ceremony on Monday to honor and remember the men and women who died in combat for our freedom. They hold this ceremony not only for the community, but most importantly their patients.

“This type of day, this type of ceremony is important to the veterans that we serve and particularly our inpatient veterans. Many of them are getting older and many of them have fought in battles. They know people that have died on the battle field and as a result of their war wounds. So this is very important for them,” said Brad Nelson, the public affairs officer for the VA Medical Center.

The American Legion post 50 participated in providing the colors and the 21 Gun Salute.

Up in Marquette County, another ceremony remembering the lost was held at Holy Cross Cemetery in Marquette.

The American Legion Post 44 hosted the ceremony, and veterans from all five military branches, the Knights of Columbus, the Salvation Army, local Girl Scout and Boy Scout troops and many others participated in the ceremony. About 100 others watched.

In his invocation, Past Commander of the American Legion Tom Ranta discussed how these service members gave their lives so the country could be free, and that we must continue to follow down the pathway they paved.

“We must never waver from that path of freedom and democracy. Take this moment, take their dream and walk forward, shouldering the cause of freedom. Carry it high and proud, as they did, and you must walk forward for them and for our children,” he said.

Also in honor of Memorial Day, a huge American flag is flying on the Mackinac Bridge.

The 30-foot by 60-foot flag is hanging from the bridge’s south tower. According to MLive, the flag is displayed in accordance with the U.S. Flag code, which calls for the flag to be hung vertically over a street, with the union on the east. 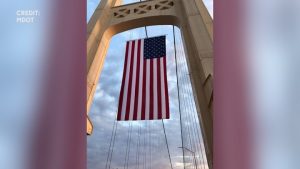 This tradition began last year, giving travelers an extra treat while crossing the bridge. The Bridge Authority has said that the flag will be displayed for four other holidays: Flag Day, the Fourth of July, Labor Day and Veterans Day. The flag was also flown on 9/11.

Memorial Day has been celebrated since 1868 by families all over the country.

Harley Davidson to expand to Munising

Redmen aiming for another conference title