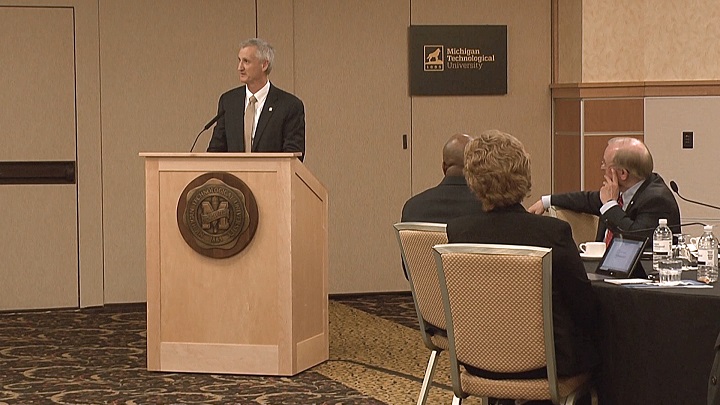 After nearly a yearlong search, the Board of Trustees at Michigan Technological University have unanimously voted to appoint the university’s next president. The board announced that Richard J. Koubek would be the 10th president of Michigan Tech.

“He’s a man of great character. His experiences are incredible. I would say everything in his career has led to this point. He was born for this position, this point, this time, this place, and we’re just so fortunate to have him as our next president,” said Terry Woychowski, President of the MTU Board of Trustees, said of Koubek in an interview with ABC 10.

Nearly 70 Candidates applied for the position, and earlier this year, the selection committee narrowed that list down to four finalists. In an interview with ABC 10, Koubek expressed that he is excited for the new position, and to launch a new phase in the future of driving a technological university forward with the excellence that Michigan Tech has.

“We have a great community of scholars and of students that can help us actualize what the vision statement is going to be with some key initiatives. So the next step is going to be working with the campus community over the next six months to understand where we want to take that. And then to put the plans in place, and get to work,” said Koubek.

Koubek is currently executive vice president and provost at Louisiana State University and will begin his tenure at Michigan Tech on July 1st. He succeeds Glenn D. Mroz, who has served as president since 2004. Mroz is stepping down to rejoin the University’s faculty.

The Board of Trustees selected Koubek from a pool of four semi-finalist candidates brought forward for consideration by a 14-member Presidential Search Committee (PSC) that included student, faculty, staff, alumni and community representatives.

Born outside Chicago in Berwyn, Illinois, Koubek spent time in California and Michigan before returning to the Chicago area as a teenager. He began his academic career as a faculty member in Wright State University’s College of Engineering and Computer Science. He later served six years as an assistant and associate professor in the School of Industrial Engineering at Purdue University. Koubek holds bachelor’s degrees in biblical literature, with a minor in chemistry, from Oral Roberts University, and in psychology from Northeastern Illinois University. He received his master’s degree and Ph.D. in industrial engineering from Purdue University.

Koubek and his wife Valerie have three grown children and two German Shepherds. He noted at today’s special board meeting that he’s looking forward to hitting the Tech Trails on cross-country skis that have been sitting in his attic for almost a decade.

“Today the Michigan Tech Board of Trustees selected an outstanding candidate in Dr. Richard Koubek to lead our global University to new heights. We are proud of Michigan Tech for their continued excellence on solving some of the world’s most complex problems and I’m proud of the work President Mroz has done to advance the University to such prominence over his tenure. I have confidence that Dr. Koubek’s leadership will fulfill the University’s mission to create the future and continue to bring great pride to the Copper Country and abroad.”

Local colleges to educate for robotics