Performances in the Park enjoys the sounds of their first summer concerts tonight. The summer series is presented by the Copper Harbor Improvement Association, and takes place in the heart of Copper Harbor at Donny Kilpela Memorial Park, centrally located along Gratiot Street. Kathy and Jeff Ihde are very excited to open the band shell back up, even if this season has come with a few hiccups. Tonight’s show with Mojo, Jake and friends will look a little different due to an emergency with one performer.

Even if you miss out on tonight’s show, there are plenty of more to come. With performers who are ready to show the crowd a good time. Performances in the Park prides themselves on providing easy listening and great time to residents, campers, highway riders, and those looking for great music, food, and a wonderful night in Copper Harbor.

Additionally there is a schedule change for later in the summer. Originally the summer concert series poster listed In Spite of Ourselves as performing on August 25th and English, Irish, and Friends on August 11th. The two acts wanted to flip dates, and the error was discovered after posters were sent out. In Spite of Ourselves will perform for Performances in the Park on August 11th. And English, Irish, and Friends will take the stage on August 25th. Both Kathy and Jeff wanted express that they’re sorry for any confusion.

The summer concert series will keep rocking throughout the summer despite the hiccups. The concerts host a wide variety of musical genres, and typically play host to local and regional acts. Concerts are free to attend, and food can be purchased from nearby restaurants or at the park. One concert you won’t want to miss is the series’ Open Mic Night, which is said to be their longest shows, and most entertaining. That show will close out Performances in the Park’s 2022 summer season. It is suggested to bring your own chair, blanket or picnic cloth. Mojo will hit the stage at 7 pm tonight. Check below for a full schedule throughout the summer for Performances in the Park. 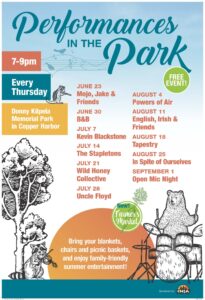