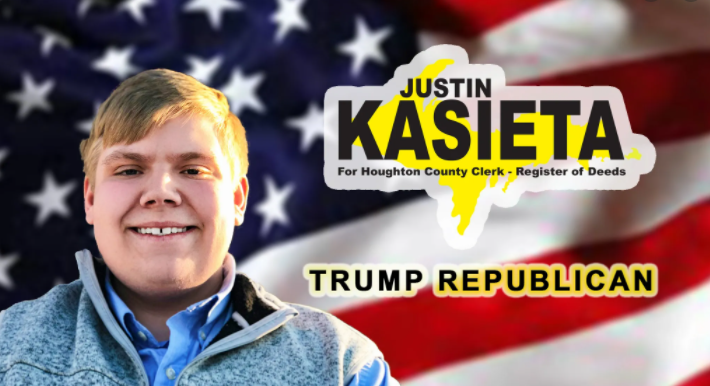 HOUGHTON COUNTY — One of the candidates running for Houghton County Clerk is being accused of harassing the other candidate by phone.

At last night’s Houghton County Board of Commissioners meeting, commissioner Glenn Anderson said Republican Justin Kasieta conspired with a Genesee County man to place the call to incumbent Democrat Jennifer Kelly around 1:00 in the morning on March 6th.

In a statement Kelly provided to Keweenaw Report, Kelly says the caller first identified himself as being with a news station, wanting to film her home. Kelly says she didn’t think TV6 would call at 1:00 in the morning, so she challenged the caller. The caller then said he was from TLC Hoarders, and had seen the inside of her home. She says he went on to say that he was going to make sure she was never re-elected, then threatened to poison and kill her dogs and throw them in a dumpster.

Kelly called the Houghton County Sheriff’s Department. An investigation of the phone number from which the call allegedly originated led detectives to Matt Smith, a member of the Davison School Board, and a candidate for the Genesee County Board of Commissioners. According to a report compiled by WJRT television in Flint, Smith told investigators that he had not originated the call, and that someone must have spoofed his number. He then filed his own police report, alleging that the spoofing had been going on for some time. His attorney asserted that Kelly is making the whole story up. See WJRT’s report here.

Kelly says she identified Smith’s voice. Detectives traced a connection between Smith and Kasieta. Kasieta was questioned by the Houghton County Sheriff’s Department. In her statement, Kelly said she was told that he had admitted involvement during questioning, and there is a confession in the case file. Yesterday, Houghton County Sheriff Brian McLean told us that is not true. He said Kasieta immediately claimed his right to counsel, and made no statement.

At last night’s board meeting, Anderson said that Kasieta has now admitted his role.

That conflicts, though, with a statement Kasieta sent us after the meeting last evening, in which he again denies any involvement in the call, and says he does not condone threats of any type. The letter, written and signed by attorney Matthew Eliason, suggests that the call may have been the idea of an overzealous supporter, and that Kelly should focus on the real issues of the election, rather than “diverting community and state resources to investigating a prank call.” See the letter here.

Anderson says the case is well documented. He called on Kasieta to remove himself from the race for county clerk.

No other commissioners commented on the situation. Kelly attended the meeting in her official capacity as county clerk, but made no comment.

Much of the investigation in Genesee County was handled by the Michigan State Police. Lt. Liz Rich in the Bay District office yesterday confirmed to us their role in the investigation. She said she could not comment further, because the case has been turned over to the Michigan Attorney General, although she did mention that charges could include harassment and filing a false report. A spokesman for the Attorney General’s office also declined to comment on specifics of the case. He confirmed that it was in the very early stages of review, and that no charges have been filed. He also said that, if the Attorney General does decide to proceed, the case will probably be sent back to the county level for prosecution.

Road commission forced to do more with less