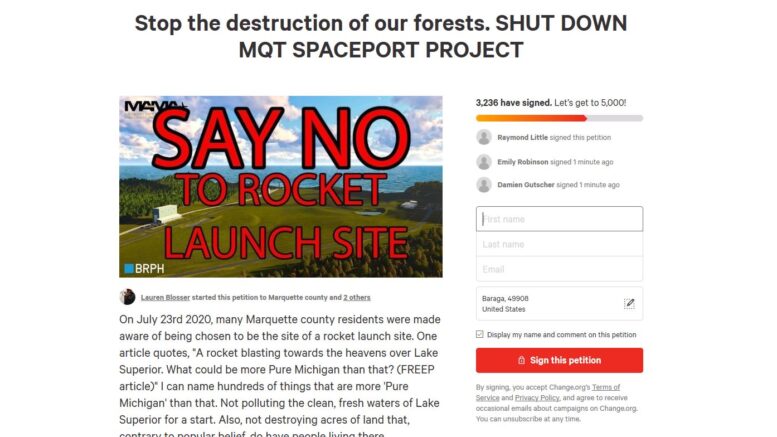 MARQUETTE COUNTY — The announcement of a spaceport coming to the UP is exciting for many, as it will bring more than 2,000 jobs.

However, others are raising their voices against the development of the sites.

Concerned citizens say the sites will damage the surrounding land and pollute Lake Superior. They’ve taken to change.org, signing a petition to call for the shutdown of the spaceport project.

The petition has garnered more than 6,000 signatures and dozens of comments in just a few days.

According to Michigan Aerospace Manufacturers Association executive director Gavin Brown, these sites will make Michigan a leader in the space industry.

Mindy Kantola, a supporter of the petition, says that the launch site will be a danger to the waters, wildlife, and residents nearby. She stated, “We ask that the voices of the immediate neighbors and local residents are given serious consideration.”

She went on to say that while the site’s proximity to the lake is “touted as a safety precaution,” it “fails to recognize that same proximity as a serious environmental and public health concern. There are very real dangers at rocket launches. Namely explosions when a test goes wrong. In addition, hazardous propellants are involved in a launch that are highly active. Sensitive populations…are particularly affected by pollutants involved in the short exposure period of a rocket launch which can be carried by the wind.”

It’s a battle of two sides. One side wants technology and an increase in jobs; the other side believes it’s an environmental hazard, and they want no part of it.