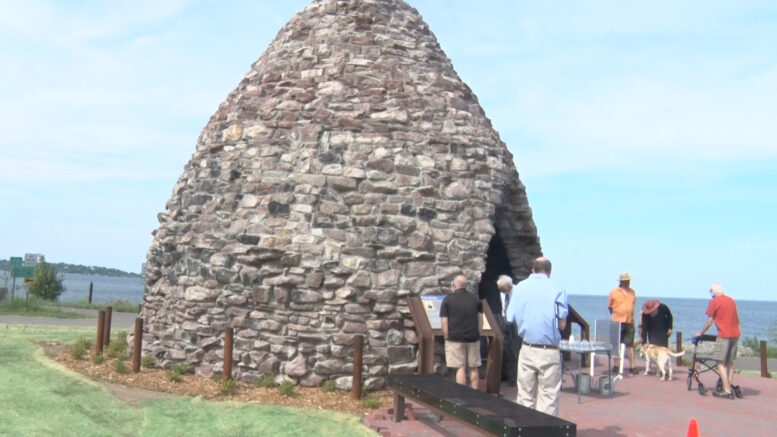 MARQUETTE — The Iron Ore Heritage Recreation Authority has been working on a project to restore a beehive kiln for the last two years, and earlier tonight they turned over the nearly complete project back to the city of Marquette.

The project was first started in June of 2018, when the city gave the Iron Ore Heritage Recreation Authority two years to complete the project on city property, with the agreement that they would give the project back to the city.

The beehive kilns were originally located on the other side of the highway, and were used in the 1800’s to make charcoal that was required in the furnaces making pig iron. Over $100,000 was raised for the project, which is another stop along the Iron Ore Heritage Trail celebrating the areas rich history.

“What we’ve always thought with the Iron Ore Heritage Trail, is we’ve got a great story here of what people did in the past,” said Carol Fulsher, the Administrator of the Iron Ore Heritage Recreation Authority. “The entrepreneurship and creativeness of how they took that ore and in the early days how they got it out of here, well actually they took the iron first and shipped the raw product, but there’s just so much to this story. We love to do these little nodes along the trail to tell people these important stories, so we’re not just a trail. We’re interpreting this area and why Marquette looks like what Marquette looks like.”

The city was excited to partner with their organization because they’re energetic about restoring a piece of history, and believes the project will be a great way to help teach people in area about the important roles the region played in the past.

“I think the goal of this project is to have people stop and say, ‘what is that?’ And have the curiosity to go look at it and learn something about our history,” said Marquette City Commissioner Fred Stonehouse. “Not only in Marquette and Marquette County, but for all of Lake Superior, and an even bigger extent all of the Great Lakes. Because this was the key shipping point for iron ore, out of the port of Marquette they shipped most of the iron for the Union Army in the Civil War. All right here. If you want history, just reach out and touch it. And this is a great example of that.”

The kiln was restored using rocks from the old kilns, the last of which had collapsed in 2016.

Dance, Dance towards a better future