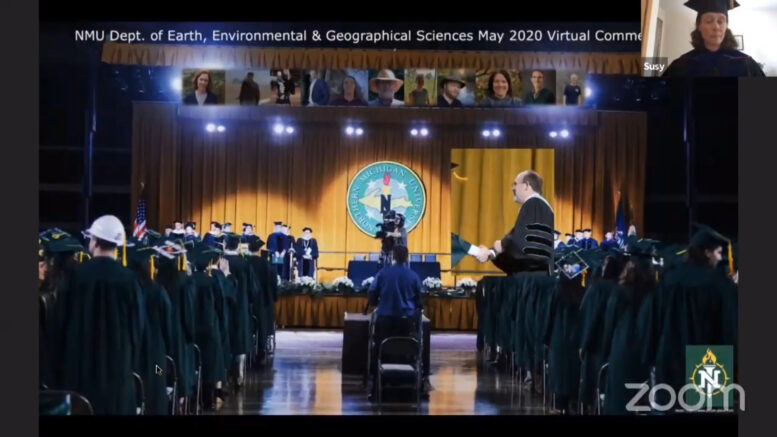 MARQUETTE — While many graduation events have been canceled due to COVID–19, one department at NMU found a way to honor their graduates.

NMU’s department of Earth, Environmental and Geographical Sciences honored their 50 graduates with a virtual commencement Friday.

Although it isn’t the same as a regular ceremony, the virtual commencement was a good way for faculty and students to say goodbye to one another, after years of hard work.

“The word that keeps coming up is closure,” said Susy Ziegler, NMU’s Earth, Environmental and Geographical Sciences Department Head. “I felt like all of us could use some closure on what was a challenging second half of the semester, and especially for our students  who’ve been working at this for a long time to graduate to not have some way to wrap things up and say goodbye seemed like it would be hard, not only for them but also definitely for the faculty who really care deeply about our students.”

Several guest speakers made appearances at the commencement, including NMU president Fritz Erickson, Dean of the College of Arts and Sciences Robert Winn, and an alumna of the Earth, Environmental and Geographical Sciences department.

NMU’s Spring Commencement was originally scheduled for May 2nd, before being postponed.